East of the Sun, West of the Moon: Gender roles

The Surlalune fairy tales blog has a poll at the bottom where people can vote on their favorite fairy tale. I was happily surprised that Beauty and the Beast came out with an impressive lead, but even more surprising to me was that "East of the Sun, West of the Moon," came in second at 15%. Not only is is lesser known than many other tales on the list, but I think of it as part of the Beauty and the Beast/Animal Bridegroom cycle of tales. Most surprising to me was that Cinderella was pretty far down the list, at 9%. I'm pretty sure if you polled people off the street, and not fairy tale enthusiasts, Cinderella would be first or second place.
As I reread "East of the Sun, West of the Moon," the subject of gender kept popping out at me.
The father in this tale is definitely one who has his own best interests in mind rather than those of his daughter, as he pressures her to become the wife of a white bear so that the family can have money. No judgement is ever made on the father for doing this, but as his advice turns out to be true, one tends to forget how selfish this really was. Yet that was the reality for a lot of girls who were given away in marriage for no purpose other than help their family's financial situation. 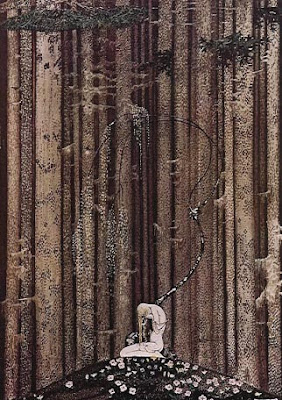 Illustrations by Kay Nielsen
The mother gives advice too-but this advice the bear warns the daughter ahead of time not to listen to the mother's advice. Immediately the reader perceives negative things about the mother, when really her advice is much more sound--to know who you're sleeping with at night. Yet the mother is also never punished, like many fairy tale women whose punishments seem too extreme compared to how the men get off. And technically, if the daughter had followed her mother's advice all the way and been careful not to let the tallow get on the Prince's shirt, she may have been able to avoid all the trouble.

Well, the Prince disappears and the heroine is left to search for him. Yet, just as both parents gave advice, which may or may not be considered helpful advice by the reader, the heroine is aided in her task by males and females alike-the four winds, which are represented as males, and three old kind hags. The hags are the ones that give her the amazing trinkets she needs to eventually win back her Prince from his new betrothed.
The Prince's new fiancee has a nose three ells long. The word has the same root as "elbow" and is meant to be the length of a man's arm. The measurements differ from country to country but could have been between 25 to 45 inches long.
As is so often the case, the villains are females. Though the whole country is supposedly inhabited by trolls, the only trolls we meet are the long-nosed fiancee and her mother.

Then, the task that wins back the Prince is washing the tallow from his shirt. People say this is an example of women only gaining salvation by housework. Yet there is also the implication that the secret to success is the difference between human and Troll, and that the heroine's success may be because it was she herself who dropped the tallow. Either way, I don't see a problem with women adding a little imagination to a chore which they were destined to do over and over again.
Although, speaking of gender roles in Norwegain tales, "The Husband who was to Mind the House" makes fun of a man who attempts to switch roles with his wife for a day and majorly messes everything up. This may make you more angry for further cementing the "men work in the fields, women work in the home" stereotype, or may make you glad that it acknowledges that keeping a house is not a walk in the park. Especially back before running water, refridgerators, etc. Although, the woman seems to do just fine doing her husband's work in the fields. Either way, I like to think of it as a good reminder to everyone not to criticize something about which you have no experience.
Posted by Kristin at 6:13 PM