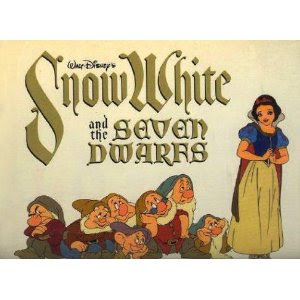 I got this sweet book from the library the other day.
Put aside any qualms you may have with the implied messages of the Disney version and let's just talk animation.

This book is full of pictures of stills from the movie, and of sketches from the animators in different stages of animation. This book is great for anyone who likes the fairy tale or anyone interested in animation or the history of film. No one can deny Walt Disney had a huge impact on the movie industry-he was always pushing the limits of what was possible. 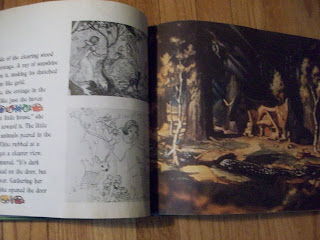 The end of the book also has a "making of" section.
Fun facts about the movie Snow White:
-Walt Disney's Snow White was the first ever full-length animated movie. While in production, it was referred to as "Disney's folly."
-Disney had plans to do a version of Alice in Wonderland first, which got thwarted when Paramount announced their Alice
-Walt told the story to anyone who would listen. He would watch their reactions to certain plot twists and refine the story according to what people responded to
-(Rejected) names considered for the dwarves: Gabby, Jumpy, Sniffy, Lazy, Stubby, Wheezy
-More than 150 girls auditioned for the part of Snow White. Disney listened to their auditions from behind a screen, not wanting their physical appearances to influence his judgement. 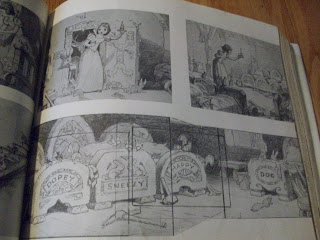 -At the time, cartoon animation was primitive and Walt wanted it to look more realistic. Actors, vaudeville performers, and staff acted out scenes for the animators. To make the characters look "rounder," the edges were airbrushed.
-Real blush was used on Snow White's cheeks
-To achieve camera-like motion, the Disney team invented the multiplane camera. Since I wouldn't explain it very well I linked you to the wikipedia
-Project expenses kept expanding. At one point, they needed a loan from the Bank of America in order to finish the project. Representative Joseph Rosenberg watched the completed portion of the film without a reaction, walked out, yawned, and commented on the nice weather. He then turned to a terrified Disney and said, "Walt, that picture will make a pot full of money" and Disney got the loan.
-At the preview, though the audience responded well, towards the end a third of the audience got up and left. The Disney team was worried until they learned they were college students who had to get back for their 10 PM dormitory curfew. 10 PM dormitory curfew! My has college life changed... 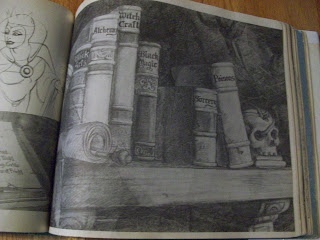 -Ingredients in the witch's peddler's disguise: mummy dust, black of night, old hag's cackle, and scream of fright
-The animators say that they improved throughout the year and a half of making the film, and that the animation improves towards the end of the movie
-Audiences LOVED the movie. The animation was so new and so appreciated, even landscape shots got applause
-It took 750 artists to make the film-towards the end, they were all working overtime to meet the Christmas 1937 deadline
Posted by Kristin at 9:01 AM