Image from here
After flipping through this library book, the pictures of faeries and goblins looked familiar to me, because I recognized the artwork of Brian Froud, who was the conceptual artist for one of my all time favorite movies, Labyrinth (as well as The Dark Crystal, another Jim Henson). This movie isn't exactly for anyone, but if a bizarre 80s fantasy starring David Bowie, a young Jennifer Connelly, and Jim Henson creatures sounds up your alley...you've probably already seen it. (But if not, go watch it now!)

Brian has researched fairy folklore and mythology, especially that around his home county of Devon, England, and according to his website, World of Froud, he believes in fairies and his artwork represents the fairies he's seen. World of Froud is a family affair, as his wife Wendy is also involved with creating fantastic artwork (she was one of the collaborators who created Star Wars' Yoda) and their son, Toby, who was the baby Toby in "Labyrinth," is now also interested in puppet making.

Poor kid. (Fun fact: the baby's name was supposed to be "Freddie" all through the script, but Toby would only respond to his name.)
Image from here 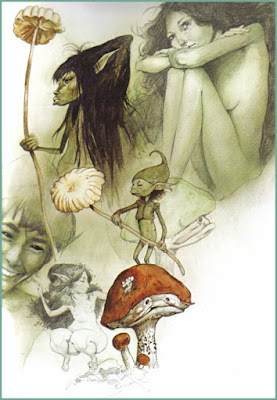 Above images copyrighted by Brian Froud
The book ("Faeries") itself is a delightful read. The enchanting pictures are accompanied by text--some in regular type, some in handwritten script, which makes it seem more like a scrapbook or diary than a textbook, even though the stories written are actual lore.
I love this excerpt from the Foreward-
"And here we must make one thing very clear. The real faerie experience is very diffrent from the general view of faerie built up by clouds of sentimental fiction with legions of inevitable happily-ever-after endings. The world of "Once Upon a Time-" delightful as it is and highly as we value it, is not the real world of Faerie. Faerie represents Power, magical power, incomprehensible to humans, and hence, inimical. ...Faerie is a world of dark enchantments, of captivating beauty, of enormous ugliness, of callous superficiality, of humour, mischief, joy and inspiration, of terror, laughter, love and tragedy. It is far richer than fiction would generally lead one to believe and, beyond that, it is a world to enter with extreme caution, for of all things that faeries resent the most it is curious humans blundering about their private domains like so many ill-mannered tourists. So go softly-where the rewards are enchanting, the dangers are real."
-Betty Ballantine
Posted by Kristin at 7:39 PM