The Key to my Heart 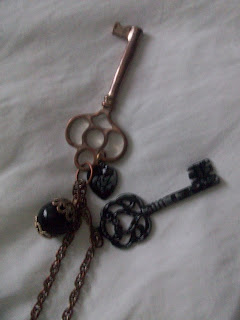 Faux antique key jewelry is very trendy right now. Walk into any mall store that sells jewelry and you'll find something like the above, from Forever 21. I have always found old keys to be fascinating and appealing, myself.
I think we like keys because they represent endless possibilities. Modern car or house keys are less appealing, but an old skeleton key could be a clue to a great mystery, or open the gateway to some enchanted hidden place, such as The Secret Garden.

Keys (especially when we see old-fashioned ones) can be associated with fairy tales. This short little treasure is from The Brothers Grimm:
The Golden Key
"In the winter time, when deep snow lay on the ground, a poor boy was forced to go out on a sledge to fetch wood. When he had gathered it together, and packed it, he wished, as he was so frozen with cold, not to go home at conce, but to light a fire and warm himself a little. So he scraped away the snow, and as he was thus clearing the ground, he found a tiny, gold key. Hereupon he thought that where the key was, the lock must be also, and dug in the ground and found an iron chest. "If the key does but fit it!" thought he; "no doubt there are precious things in that little box." He searched, but no keyhole was there. At last he discovered one, but so small that it was hardly visible. He tried it, and the key fitted it exactly. Then he turned it once round, and now we must wait until he has quite unlocked it and opened the lid, and then we shall learn what wonderful things were lying in that box."
That's the whole tale! I like to think that this tale was always told with a sense of humor. I imagine a parent telling children bedtime stories and saying, "All right, now it's time for you to go to bed," and the kids are like, "No, one more story, please, daddy, please!" and so the Dad tells one more story that's super short and doesn't even have a climax and the kids are like, "You can't end there, Daddy!" and he's like, "Nope, that's it, time for bed."
But once again, the key opens something we assume will be "wonderful," and the contents of the box are probably more wonderful when left to our imaginations.
The below key, which I wear as a necklace, has a story behind it. From what we can gather from my grandmother's scrapbook, we think she swiped it from her college infirmary one time when my grandfather, then her boyfriend, was sick and she wasn't allowed to visit him, and she kept the key. 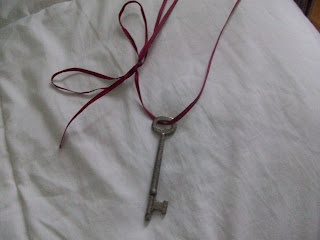 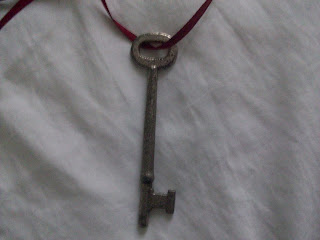 Not all keys open exciting and wonderful things, though. I mentioned the key in Bright, Deardeer, and Kit a while back that opened the cupboard with Deardeer and Kit's old skins stretched out. Sleeping Beauty turns a key that leads her into the room where she pricks her finger on the spindle and falls into a death-like sleep. And who can forget the blood-stained key in Bluebeard that leads to a room full of mutilated corpses, signaling the heroine's doom to follow the same fate at the hands of her murderous husband?
Yet the possibilities of danger because of whatever the key opens only adds to their excitement and mystery to the reader of tales.
Posted by Kristin at 4:32 PM