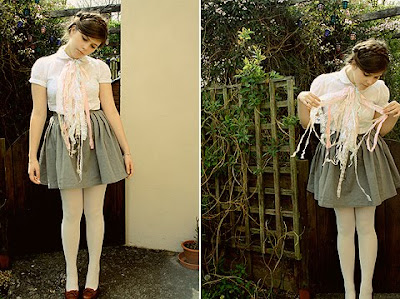 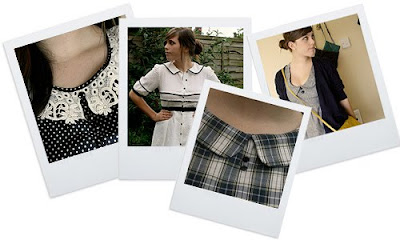 Images by Carrie of Wishwishwish
My introduction into the blogging world was through style and fashion blogs, not fairy tale blogs. I (stupidly) had never even looked for or read any fairy tale blogs before I started this on a whim one day.
Anyway, the style blogs I prefer are usually girls who love vintage. Peter Pan collars are a favorite among some of my favorite bloggers, though not really "in" right now. I wondered what relation the collars had with the character Peter Pan and found this information on Retroland:
"When Disney got a hold of Peter Pan in 1953, they made some distinct wardrobe changes - notably, a jagged V-neck replaced the delicate, rounded collar that had come to be known for decades as the Peter Pan collar. But up until that time, this simple and sweet collar named in the honor of the boy who never grew up found its way around the neck of many a boy and girl who wanted to grow up to be just like their hero.
"The Peter Pan collar wasn’t always called such. In the late 1800s, it was referred to as the Little Lord Fauntleroy suit collar, and was designed out of either plain white cotton or frilly lace. When J. M. Barrie’s famous play hit the stage in 1904, however, the collar would be renamed forever in Peter’s honor. Little boys everywhere, who wanted to emulate their flying friend, embraced the fashion. In the 40s, it was incorporated into the Eton suits worn by angelic tykes, and a decade later, little girls had taken to the style as well, carefully folding the collars over their cardigans. For the older girl, a string of pearls completed the look. While not exactly on the fashion forefront these days, an occasional Peter Pan collar can still be seen from time to time, harkening back to flying adventures to faraway lands and representing all that is innocent and good in the world. Jagged V-necks, not so much." 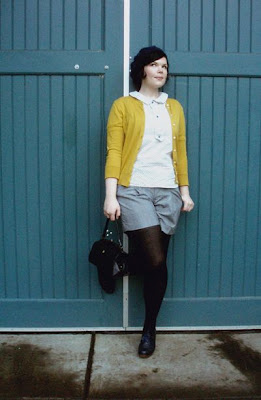 Image of Emily on Some Girls Wander
Posted by Kristin at 1:12 PM