Jane Eyre by Charlotte Bronte has been a favorite novel of mine since I was young. I think it was the first real "adult" book I read, and though a lot of it went over my head at the time I loved it then, and have loved each time I revisited it.
So I was fascinated to learn that Jane Eyre is full of fairy tale references. Not only is there a running theme that Mr. Rochester suspects Jane to be from the faerie world and not the human world, but Karen E. Rowe has written on the patterns seen from Cinderella, Sleeping Beauty, Bluebeard, and Beauty and the Beast. 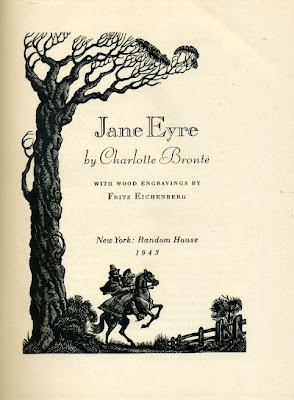 Unfortunately I haven't been able to read what Karen E. Rowe has actually written--I can't find the whole text online, if anyone knows of a link I'd love to have it. I can see some of the themes on my own (don't read on if you don't want spoilers)-Jane Eyre goes from being orphaned and then to a place as governess, which was a form of servitude, and ends up well-off and happily married. But this general rags-to-riches theme is pretty universal-usually stories end up with the characters better off than when they started. I wouldn't have necessarily thought of Cinderella.
I don't really see how Sleeping Beauty fits in, other than...she only lived with females till she was 18? Or, maybe when she runs away and stays with her cousins, that's a form of enchanted sleep since she's hidden from the normal world for a while? I'd welcome other guesses on that one.

Charlotte Bronte
Bluebeard is more obvious. Mr. Rochester isn't murderous like the infamous husband himself, but a secret wife in a secret room isn't standard romance fare. The tables are turned as Bertha ends up being the crazy one and not the husband (although, hard as it is to imagine, some people apparently don't see Bluebeard as being out of line *cough Perrault cough*).
And I had already made the connection to Beauty and the Beast myself, but I tend to have a one-track mind. In fact anything I find romantic I realize ends up being (at least) indirectly a BatB theme. In Jane Eyre the characters switch places, with Rochester starting off being the Prince Charming and Jane being almost like an understated female beast. Called "plain" over and over again, and also being a servant, any prospects of being loved by her Master were pretty bleak. By the end, though, he's an old hermit who is blind and deformed, and she has a respectable place in society, compared to him. Some versions of Beauty and the Beast have this flipping of roles as well, notably Robin McKinley's Beauty. Beauty has the advantage at first, but she, like Jane, is also supposedly "very plain." After the Beast transforms, Beauty assumes he would no longer want to marry a poor, plain country girl such as herself. Yet, like Jane and Rochester, their love for each other supersedes all obstacles.
Posted by Kristin at 3:55 PM