The title of that post is, obviously, chronologically incorrect as far as the history of the story of Peter Pan goes. But, as far as my own knowledge went, and I think most people had the same experience--we grew up watching the Disney films. Later on, I became interested in the history of fairy tales before Disney and reading what I thought were the "authentic" tales found in the Grimm collection-or, in this case, the J.M. Barrie play (which really is the authentic version). 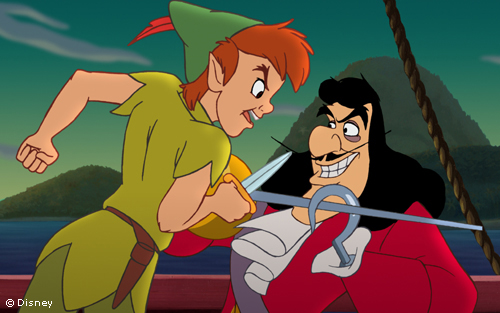 I used to have(/still do) a conspiracy theory about the Disney version. Captain Hook is the supposed villain, but what did he ever do? We have no record of evil deeds he did to Peter Pan before Pan a) sliced off his hand, and b) fed Hook's hand to the crocodile, who now has an insatiable craving for Hook. If I were Hook, I would certainly want revenge on the cheeky little boy who can fly and imitate voices and therefore has the advantage in everything. What good does Peter do? All he does is flirt (Wendy, Tinker Bell, Tiger Lily, the mermaids).

Just to clarify, I don't really have a vendetta against Peter Pan. I love the movie, and especially the ride at Disneyland. I love the part where you fly over London!

The Disney movie was based on the play I mentioned earlier, written by J.M. Barrie. The little of the history of the play I know, I know from the movie Finding Neverland, which, of course, isn't entirely historically accurate, but makes a nice movie. According to IMDB:

"After the death of two of Barrie's close friends, Arthur and Sylvia Llewelyn-Davies, he adopted their five sons: Peter, Jack, George, Michael and Nicholas. Barrie was very close to all the boys, and was heartbroken when Michael drowned in 1921 and George was killed in action in 1915. Their brother, Peter Llewelyn-Davies, also committed suicide on April 5th, 1960.

"From 1928 onwards, all royalties from the sales of Peter Pan were donated to the Great Ormond Street Hospital. In 1987 (50 years after Barrie's death), when normally royalty rights would have expired, by a special act of Parliament, royalties were allowed to continue going to the hospital in perpetuity."

Recognize any of those boys' names? Peter should be obvious. The boys who go to Neverland are Michael and John--Jack's real name could be John. And Mr. Darling's first name was George. Looks like poor Nicholas got the shaft. (By the way, that's really cool about the royalties going to the hospital).

Anyway, the play is very funny. Though written as a play and performed as a play, half of the funny parts are in little sidenotes given in the stage directions, so it's really meant to be read. 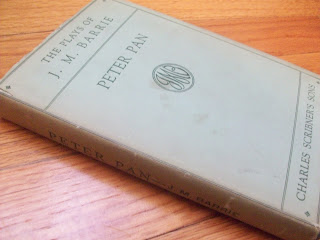 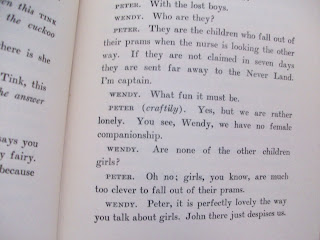 Also, reading the play made me appreciate the different versions better-Disney, the musical, the P.J. Hogan movie from 2003. Though all different, they all stayed pretty true to the original script. Even the movie Hook, though supposedly a sequel, has a part where the boys are eating imaginary food, which is what they eat in the play.

Fun fact: In the dedication, Barrie describes how it came about that one needed pixie dust to fly. Apparantly, lots of children were playing Peter Pan and injuring themselves trying to fly. Parents requested that pixie dust be added as a prerequisite to flying. This was a good idea, and would probably decrease Peter Pan related injuries due to the fact that pixie dust is scarce, so he put it in his play.
Posted by Kristin at 11:26 AM