There was once a poor tailor whose son was so idle and lazy that the tailor eventually died from grief. Still nothing persuaded Aladdin to change his ways.


One day an African magician came to Aladdin, claiming to be his uncle. The man offered to buy and stock a shop for Aladdin. They set out on a journey, and on the way the uncle revealed a magical entrance to an underground cave. Aladdin is instructed to go into the cave, touching nothing, and bring up a lamp. The uncle also gave Aladdin a ring. 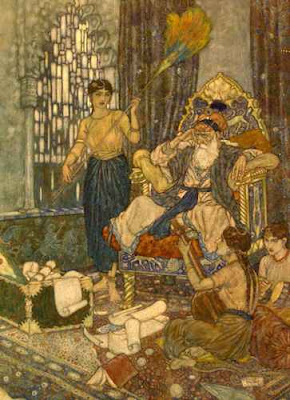 Edmund Dulac
Aladdin fetched the lamp as he was told, but refused to give his uncle the lamp until he was out of the cave. The magician became furious, and magically rolled the stone back over the mouth of the cave. The uncle was really not Aladdin's uncle at all, but had needed someone foolish enough to get him the magic lamp so he could kill him afterwards.
After a couple days alone in the dark cave, Aladdin clasped his hands to pray, and in doing so rubbed the ring. Immediately a large genie appeared and stated that he would obey Aladdin in all things. Aladdin doesn't even hesitate but orders himself out of the cave. He returned home to his mother. He offers to sell the lamp in order to get money for food, and began to rub it since it was so dirty. Another genie (this one is "hideous") appeared to do Aladdin's bidding. He ordered food, and he and his mother ate their full.
With the genii, Aladdin and his mother were never poor again. One day Aladdin was seized by the desire to view the Princess as she went to her bath, which was forbidden. He caught sight of her as she lifted her veil and was instantly in love. He forced his mother to stand by the Palace every day in order to ask the Sultan for his daughter's hand. She took with some of the enchanted fruits that "sparkled and shone like the most beautiful jewels."

Eventually the Sultan noticed her, and impressed by her rare treasures, promised his daughter to her son, in three months' time. But during this time the Sultan forgot his promise, and in two months his daughter was about to enjoy her wedding night with another man. Aladdin ordered the genie of the lamp to carry the Prince in his bed outside and leave him there till morning, and Aladdin took his place next to the terrified Princess. After another night of this, both bride and bridegroom were willing to be separated. When it was the appointed time, Aladdin ordered himself a splendid procession from the genie, and built a large and bejeweled Palace for the Princess. He left one jeweled window lattice undone, to allow the Sultan to have the pleasure of finishing it. But the Sultan realized he did not have enough jewels of his own to fill even one window lattice.


Aladdin was a gentle and wise ruler, loved by the people. However, the magician had not forgotten about the magic lamp. He heard of Aladdin's fame and tracked him down. Posing as a lamp trader, he tricked the Princess into giving him the magic lamp for a newer one. The genie of the lamp obeyed his new master and brought the entire Palace, with the Princess in it, to Africa. The Sultan sent for Aladdin, who was out hunting, and ordered him to be beheaded. Aladdin pleaded for forty days in which to find the Palace and his wife. He intended to say his prayers and throw himself into a river, but once again accidentally rubbed the magic ring, bringing forth the other genie. However, the ring genie could not undo the magic of the lamp genie. So he brought Aladdin to the Palace. He found his Princess, who had treated the magician so harshly he avoided the Palace altogether. Aladdin told her to pretend to be welcome to the magician's advances, to beg for African wine, and to put a certain powder he gave her into the magician's wine. 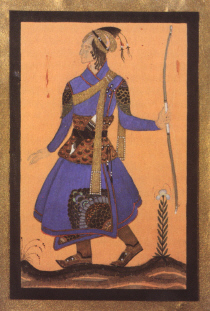 Kay Neilsen
The Princess did as Aladdin said, and successfully poisoned the magician. Aladdin and his Princess were reunited and returned to China. However, the magician had a younger brother who wanted to avenge his brother's death. He posed as a holy woman, and was invited into the Palace by the Princess. The false holy woman convinced the Princess that a roc's egg was needed to make her home truly beautiful, and she requested this of Aladdin, who requested it of the genie. The genie shrieked, for the roc's egg was his master, told Aladdin the truth about the false holy woman, and disappeared. Aladdin requested to see the holy woman but pierced the magician's brother with his dagger. After this Aladdin and his Princess lived in peace.
Posted by Kristin at 11:47 AM