With Disney, you can expect at least something to be changed from the original source. While the journey through the sewer and all the dangers entailed may seem like movie makers trying to beef up the story a bit to make it more enticing, that's actually all from the fairy tale. In fact, the short follows the story pretty closely until the very end, in which the evil jack-in-the-box (which is really a goblin who lives in a snuff box) does not fall out of the window, and the soldier and the ballerina do not live in perfect bliss. No, true to Disney style, Andersen's more tragic endings have been covered up. In the real story, the child puts the soldier in the oven, for no reason, and the ballerina is carried in as well. The tin soldier burns and melts into a heart, and all that's left of the ballerina is her tinsel rose. 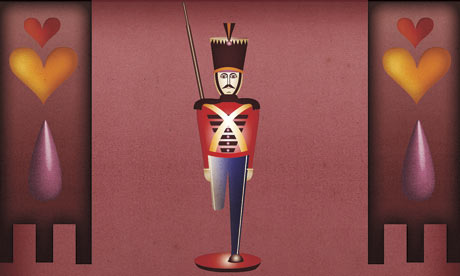 
Now, backing up-I adore this fairy tale. The reader's heart immediately goes out to the one-legged tin soldier. I love anything that relates to Beauty and the Beast, and there are two levels-there are actual versions of the tale, that involve most of the plot and prop elements, such as the father and the rose and Beauty staying at the castle of the Beast. Then there's a broader level, where any story in which there is an outcast character because of some physical deformity or difference is also distantly related to Beauty and the Beast. So in that way, the Steadfast Tin Soldier is like a Beast figure. He also would like to marry the ballerina, but "she is too grand."


I also love any story in which toys come to life. Everyone knows that this happens when people leave the room, and we have proof from The Christmas Toy and Toy Story. And yet, though the whole thing is from the perspective of the Tin Soldier, there's an eerie juxtaposition between him as a tin toy and him as a thinking being. The whole time, he comes up with reasons for why he doesn't cry out for help (he's too proud as a soldier) or speak to the rat in the sewer, etc. Critics relate this to Andersen's passivity, but you wonder if it's really because, as a toy soldier, he simply can't move, though he thinks he can. The only action he instigates is laying himself down to get a better look at the dancer, but that could possibly be that the soldier was knocked over. It adds to the helplessness of the characters and the pointlessness of the unhappy ending, yet leaving the reader freedom to imagine either circumstance. 
The story almost needs the depressing ending to justify the miraculous return of the soldier from the belly of the fish, to the very playroom from which he started. The ending at least gives it more realism, and the shape of the heart and the rose left make it bittersweet and tragically beautiful. Critics seem to view the ballerina as being punished for not returning the soldier's love, but it seemed to me that maybe the wind blowing her into the oven was maybe so that they could die together rather than having her live alone without him. Maybe I'm hopelessly romantic, but she does leave a rose behind, which is very symbolic of love.

This morbid image by Kay Nielsen is my favorite
One more thing-this type of tale, in which the protagonist is a toy or animal, is part of a tradition of insinuating that the ultimate villain is one who is MEAN TO THEIR TOYS or wouldn't go to any length for the sake of a pet. Now I love animals and toys, and I think we should be kind to animals and it's probably a red flag if a young child doesn't show some level of affection for toys that resemble humans and animals, so I don't really mind. But this level of thought reached new levels in the movie The Brave Little Toaster, in which the protagonists are all household appliances. This movie freaked me out when I was little, and it's even pretty horrifying to me now. It's incredible how they make a man who recycles used appliances into evil personified, and how the boy almost dies in an attempt to rescue his childhood toaster. Going back and rewatching this movie made me think about how I perceived it as a child-I only remembered the scary parts, I didn't remember any of the resolutions. I think there's a lot that goes into how a child perceives a story and it's often much different than the intended message-but that's a whole other topic.
Posted by Kristin at 4:47 PM