Inspirations for Disney's Beauty and the Beast

The creators of the Disney Beauty and the Beast said that they gleaned from the existing versions of Beauty and the Beast to produce their own. While it does seem that their version is hardly at all like the Villeneuve/Beaumont, the more you research other versions the more you see similarities. For example, though the Gaston character is unique to the Disney version, there is a Gaston-like character in Cocteau's film. I wonder if the famous image of the arms holding the candelabras was the inspiration for Lumiere, too.

From Jean Cocteau's Beauty and the Beast 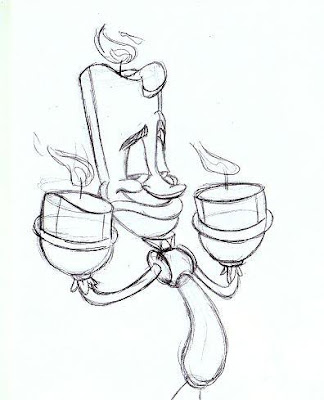 Another unique feature of the Disney version is the way in which the Beast becomes cursed. Villeneuve explains that an evil fairy cursed him out of spite because she wasn't able to seduce him in Prince form. Most versions just say an evil fairy or magician cursed him without going into detail. Disney provides an interesting twist in that the Beast behaves completely selfishly, is tested by a fairy, and his rightful punishment is to take on the form of an animal to match the animal he was acting like. Once he learns to behave like a man again, he is able to take on the appearance of a man. 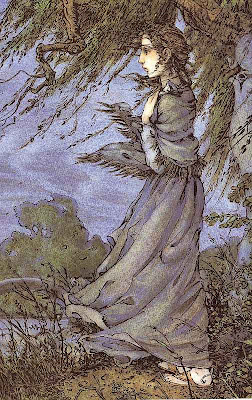 This exact same plot element is found in the children's book version by Marianna Mayer, illustrated by Mercer Mayer, from 1978. The Beast tells Beauty, "When I was a boy I was very vain and quite proud...One day an old hag came begging at my palace gate. I showed her no pity, she was so ugly. The sight of her did not move me and I sent her away without food or money. As she left she warned that I would spend the rest of my life wandering in my fine palace without a friend till someone could find Beauty in me." After the Beast turns into a Prince, he explains, "Now at last I am free to tell you that the old woman was really a fairy in disguise sent to sest me. Though I failed she was kind enough to put my whole palace in a magical spell till I could find you to redeem me." 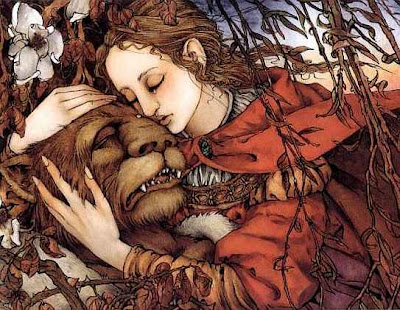 Above images by Mercer Mayer

I've already wondered if the enchanted objects were inspired by Robin McKinley's invisible maids. What else can you think of from older versions that might have been the inspiration for elements of the Disney film?