Juliet Marillier's Heart's Blood is listed as one of the modern interpretations of Beauty and the Beast on Surlalune. At first, from the summary, it seems like hardly a version of Beauty and the Beast and more of a young adult fantasy novel whose hero happens to have partial paralysis that makes him look slightly asymmetrical.
However, I applaud Marillier for creating a truly unique and original story that has clear parallels to Batb. For example, Caitrin-not her father-meets Anluan in the garden, while looking at a rare flower-not a rose, but heart's blood. He responds angrily, like the Beast. Unusual circumstances compel her to stay with him-not bargaining for her father's life, but working as a scribe to translate documents of his ancestors (which is a lot like Mercedes Lacke's Fire Rose). There is a period of growing to love him, and then one of separation, where she returns because she sees a vision of his dying body in a magic mirror she had brought with her.

The plot also reminded me a lot of Jane Eyre (which gets a lot of tags for a fairy tale blog...) the employment in Anluan's house, the similarities between Anluan and Mr. Rochester, Caitrin's independence, and the scene in which she sees him in the mirror and speaks to him and imagines that he hears her is like when Mr. Rochester calls to Jane from miles away and she hears and replies. At times the action and character of Caitrin also reminded me of Robin McKinley's The Blue Sword, an all-time favorite of mine.

In general I tend to be very critical of modern writers. It seems that we have mastered the exciting, page-turning plots, but lost some of the mastery of language and depth of realistic characters of older novels. They tend to be more like vicarious wish fulfillment than powerful, moving stories. So, with that said, I wasn't thrilled with the writing style and characterization, although I've read much worse. But there were good messages, and the plot was a clever nod to the fairy tale while being fresh, dark and interesting-I literally couldn't put the book down.

Heart's blood, the flower in the book, is fictitious, but there is a flower called Dicentra, which is also called Bleeding heart. The reason is pretty obvious: 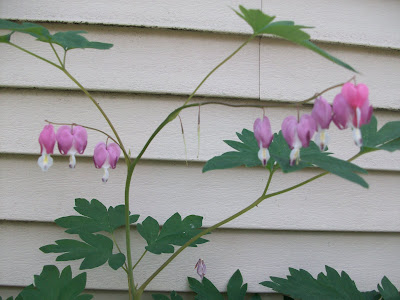 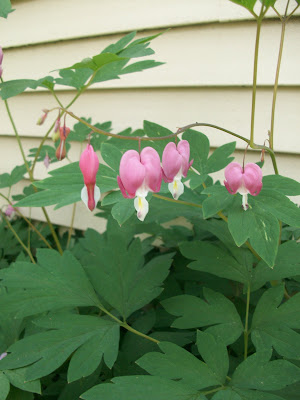 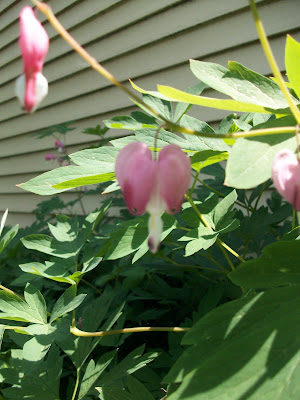 EDIT: Marillier contributed to Seven Miles of Steel Thistles and talked of her love of Beauty and the Beast, the tale's history, and her process in transforming the traditional tale into this novel
Posted by Kristin at 11:36 AM