Today I spent some time with elderly relatives. Now, I love a good classic horror story, especially involving ghosts and haunted houses, but to me the most truly terrifying thing about life is growing old and ageing. Not only the inevitability of death, but as loved ones grow older and older and regress backwards in time, going from independent adults to a helpless, infant-like state-physically and mentally. As hard as it is to watch other people go through this, in the back of one's mind you can't help but remind yourself that this could be you one day, once again unable to walk or feed yourself or remember what you just had for lunch.

So, first of all, to set the tone: Gustav Holst's "Saturn: The Bringer of Old Age" from his orchestral suite The Planets. Though not directly related to fairy tales, it's related to myth anyway. I love how Holst portrays old age as this eerie, creepy, relentless march.

The Grimms Collection, though it definitely celebrates youth (sometimes in a creepy, pedophily way- Snow White was only 7 at the time she was abandoned in the woods and there's no reason to believe much time passed before the Prince became obsessed with her corpse), but there are a few fairy tales about old age.


"The Ungrateful Son" features a son who refuses to give his aged father any food. As punishment, a great toad permanently attaches himself to the son's face. "The Old Man Made Young Again" is quite violent-the Lord and St. Peter make an old man young again by putting him through a forge. The smith decided to try the same thing with his mother-in-law, but she only experienced pain and no miracle. The screaming of the old woman and the sight of her sufferings caused the smith's wife and daughter-in-law, who were both pregnant, to immediately give birth to creatures who became the first of the race of apes.

In "The Aged Mother," an old mother bitterly remembers how her family is dead, including her two sons. Hearing bells, she is surprised for it to be morning already, but goes to church. Only instead of the regular churchgoers, she realizes all the people in the pews are the ghosts of her dead relatives. At the front of the church is a vision of her two sons, "one hanging at the gallows, the other bound to the wheel." The mother's dead aunt tells the mother that the death of her sons was actually a mercy, to prevent them from the wicked lives they would have lived. The mother is no longer bitter but thankful towards God. Three days later she dies. 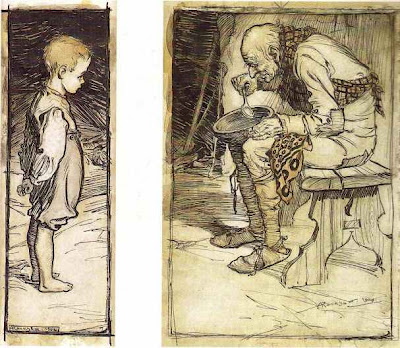 My favorite, though, is "The Old Grandfather's Corner." An old grandfather lives with his son and daughter-in-law. He is deaf, can barely walk, and can barely eat without spilling. Eventually his son and daughter-in-law set him in a corner behind a screen, out of their sight. The old man would look mournfully toward the table but say nothing. One day he accidentally broke his bowl, and the young mother had to buy him a new wooden bowl for a penny.

One day, the couple saw their small boy making something out of wood. They asked him what he was doing. "I am making a little bowl for papa and mamma to eat their food in when I grow up," he replied. The parents looked at each other and began to cry. They brought the aged grandfather back to the table with them and never again treated him unkindly. In a Russian variant of the tale, instead of the parents sentencing the grandfather to a corner of the room to eat, they were going to leave the grandfather alone in the woods to die until the little boy reminded them that in another generation, their roles would be different.