"The Erlking as a character has its origins in a common European folkloric archetype, the seductive but deadly fairy or siren (compare La Belle Dame sans Merci and the nix).[1] In its original form in Scandinavian folklore, the character was a female spirit, the elf-king's daughter (Elverkongens datter). Similar stories existed in numerous ballads throughout Scandinavia in which an elverpige (female elf) was responsible for ensnaring human beings to satisfy their desire, jealousy and lust for revenge." (From wikipedia) 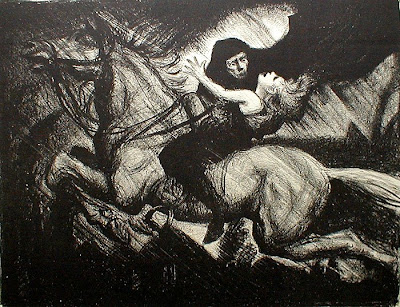 The Erl King was further popularized by Johann Gottfried von Herder's story, in which a young groom is temporarily seduced by elf music. The Erl King's daughter attempts to seduce him, but he spurns her. In her anger, she sends him away and his bride finds him dead in the morning.

Goethe's later poem is an eerie dialogue between the Erl King, a young son, who sees the Erl King coming for him, and his father, who doesn't believe him...until it's too late.

"Who's riding so late through th' endless wild?
The father t'is with his infant child;
He thinks the boy 's well off in his arm,
He grasps him tightly, he keeps him warm.


My son, say why are you hiding your face ?
Oh father, the Erlking 's coming apace,
The Erlking 's here with his train and crown!
My son, the fog moves up and down.


Be good, my child, come, go with me!
I know nice games, will play them with thee,
And flowers thou 'It find near by where I live,
pretty dress my mother will give.


Dear father, oh father, and do you not hear
What th' Erlking whispers so close to my ear?
Be quiet, do be quiet, my son,
Through leaves the wind is rustling anon.


Do come, my darling, oh come with me!
Good care my daughters will take of thee,
My daughters will dance about thee in a ring,
Will rock thee to sleep and will prettily sing.


Dear father, oh father, and do you not see
The Erlking's daughters so near to me?
My son, my son, no one 's in our way,
The willows are looking unusually gray.


I love thee, thy beauty I covet and choose,
Be willing, my darling, or force I shall use!
Dear father, oh father, he seizes my arm!
The Erlking, father, has done me harm.


The father shudders, he darts through the wild;
With agony fill him the groans of his child.
He reached his farm with fear and dread;
The infant son in his arms was dead.

Schubert's musical setting of the poem
Posted by Kristin at 8:52 AM