In 1874, Russian composer Modest Mussorgsky saw an exhibit in honor of a friend and artist, Viktor Hartmann. Mussorgsky was so moved by the paintings he saw, he created a piece of music to go along with the exhibit, Pictures at an Exhibition. 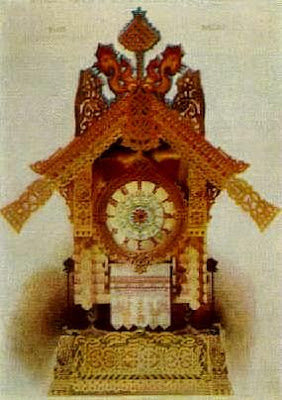 One of the paintings Mussorgsky saw and created music for is the above, "Baba Yaga's Hut". It may look like an ordinary clock at first, but look at the tiny chicken legs at the bottom. Here are a couple other artistic interpretations of Baba Yaga's hut:

Baba Yaga is a figure in traditional Russian folklore-the classic fairy tale witch. She lives in a hut that stands on chicken legs and often the fence and trimmings are made from human bones. From wikipedia: "Baba-Yaga (in Russian pronounced Bába-Yəgá; also spelled Baba Jaga, written Баба Яга) is a witch-like character in Slavic folklore. She flies around on a giant mortar or broomstick, kidnaps (and presumably eats) small children, and lives in a hut which stands on chicken legs. In most Slavic folk tales she is portrayed as an antagonist; however, some characters in other mythological folk stories have been known to seek her out for her wisdom, and she has been known on occasion to offer guidance to lost souls, although this is seen as rare."

Here is Mussorgsky's movement inspired by the painting:

Mussorgsky may also be known to fantasy fans for his Night on Bald Mountain, which appeared in Disney's Fantasia.