I'm certainly not the first person to talk about this, but it's been on my mind lately since I've been planning my own wedding. As soon as you start looking at dresses, locations, etc., a bride-to-be keeps hearing the phrase "fairy tale wedding." Businesses want to endorse the image of the wedding being the most perfect day ever so that you'll justify spending exorbitant amounts of money for your special day. But implicit in the phrase and what it is supposed to mean is a misunderstanding of fairy tales in general.

The "fairy tale wedding" is, in theory, the couple's ideal, dream wedding. This coming from the misconception that fairy tales themselves are ideal. And in one sense, the happy endings do generally tend to be ideal, but they're more of a well-deserved rest for the main characters who have been through hell (sometimes literally) and back. But even then, you don't hear much detail about what makes it so happy, or the wedding itself, even though many fairy tales do end with a wedding. Some folktales end with a line about being invited to the wedding, and eating their fill and having wine run over their beards (see my beyond happily ever after post), but I highly doubt this is what bridal stores have in mind when they use the phrase "fairy tale wedding."

Someone had asked me in the comments if I was going to do a fairy-tale themed wedding. I honestly don't know how I would go about doing that-it seems the most common way is to pay ridiculous amounts of money for products that allude to Disney Princess movies. I could have spent quite a bit of my budget on one of these Alfred Angelo gowns inspired by classic Princesses: 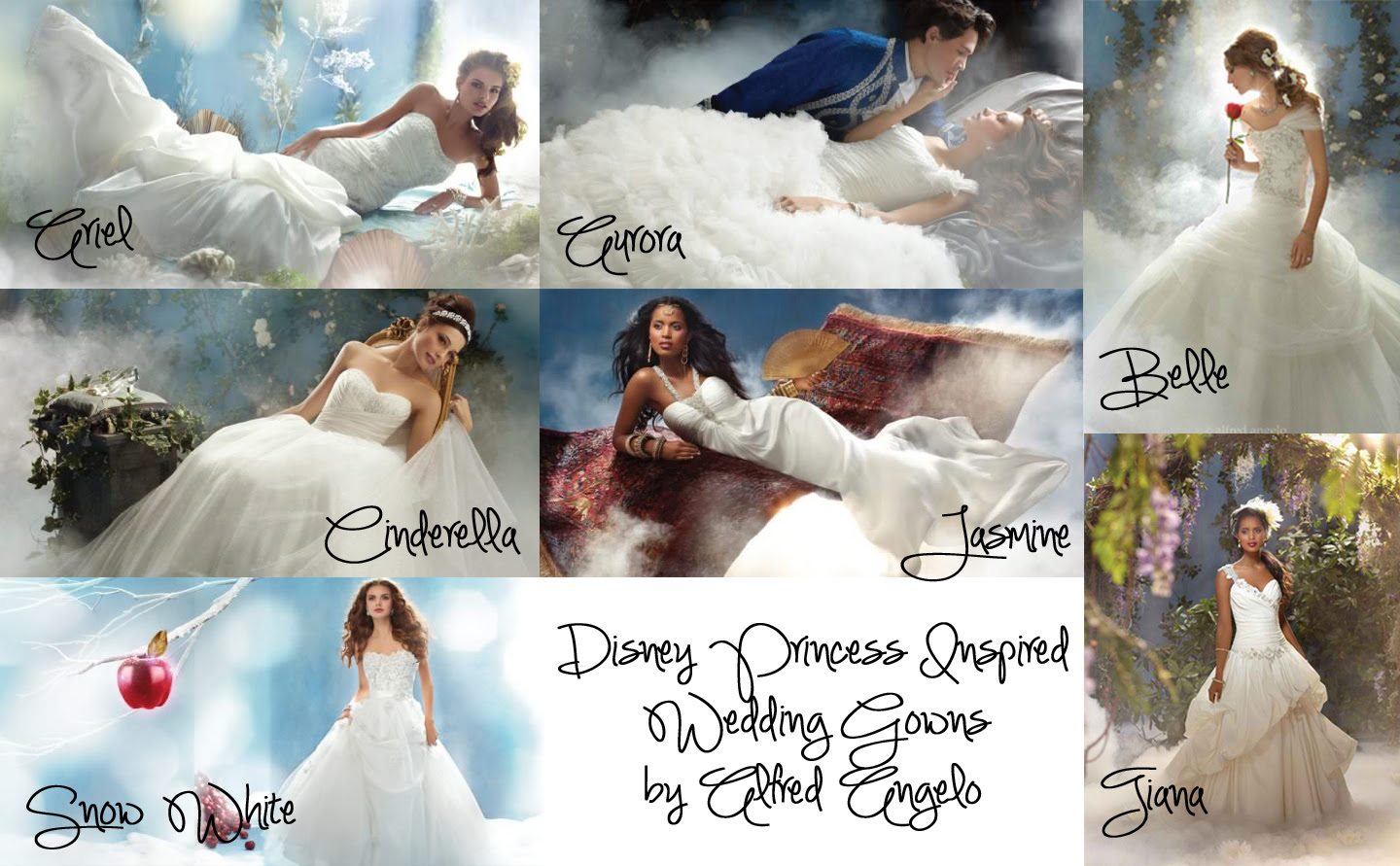 But without the backgrounds you really wouldn't even know they were supposed to be Disney at all. Do any of you have ideas for how to allude to fairy tales without bringing Disney into the equation? I was looking through one book at my library that had suggestions for a fairy tale themed wedding. Some I thought were cute, like to make your invitations look like a page out of a storybook. Others I thought laughable, like to put your flower girl in a "before transformation" outfit and have her carry a pail down the aisle, and for an older woman to dress up like the fairy godmother and touch the bride with a wand. It's a wedding, not a play. And I'm pretty sure our bridal party would hate us if we made them dress in medieval costumes like the book also suggested.

I would watch episodes of "Say Yes to the Dress" like it was my homework while I was dress shopping, and one episode I thought was particularly ironic. I'm pretty sure it was Season 3, episode 3, titled "Once Upon a Dress," and the theme tying all the brides together was the idea of the fairy tale wedding. As happens so often on that show, one bride had particularly rude sisters with her, who were insulting her body and everything she tried on. The narrator at the end said something like, "for some brides, dress shopping is nothing like a fairy tale, as [insert bride's name] had to deal with the harsh words of her sisters." And I was like...are you kidding? That is EXACTLY like a fairy tale. It could hardly be more like Cinderella! Cinderella is defined by her cruel mother and sisters much more so than her wedding.

So, if any of you have ideas/links to share of wedding ideas that are fairy tale but not overtly Disney, please share in the comments! I have a future post in the works.

Also, I think this image perfectly captures, in my mind, the disconnect between people's conception of fairy tales in general/"fairy tale weddings", and what actually happens in fairy tales: 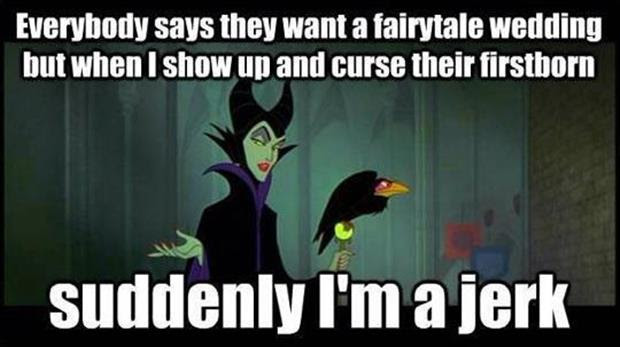 (Google images got it from here. I'm pretty sure I already saw this meme on Asshole Disney)
Posted by Kristin at 10:10 PM 5 comments: 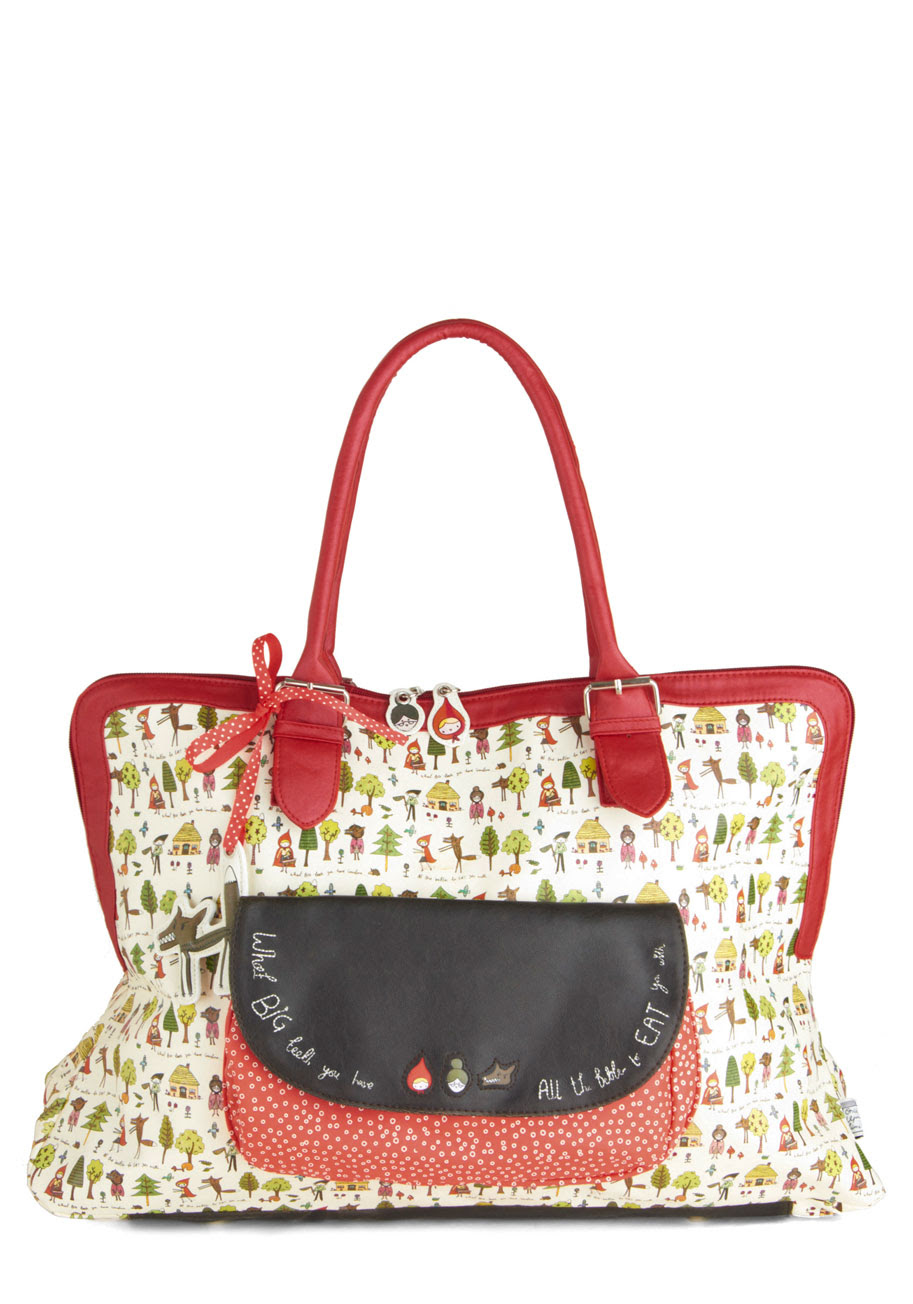 Hop a Ferry-tale Bag, available at Modcloth! Click through to see the closeup of the Little Red Riding Hood print. In an effort to find a better picture of the print to post here, I discovered there are several other LRRH bags on pintererest. I think this antique one is pretty sweet: 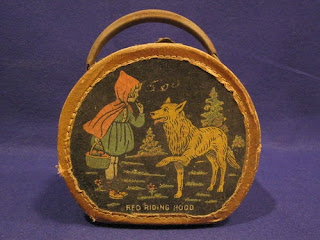 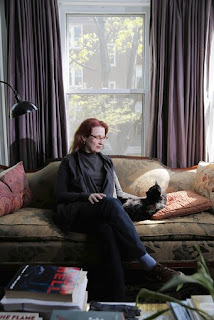 An article in the Chicago Tribune about a new fairy tale ballet caught my attention. "Raven Girl" is based on a book by Audrey Niffenegger. At first I was suspicious that it would be just a fantasy book that is mildly similar to fairy tales and thus earned itself the article title. But although it's definitely a modern story, I was intrigued by the interview with Niffenegger and how she did relate what she had learned about fairy tales to the writing of her novel. For example, on transformation:

"Fairy tales, you know, almost always feature some kind of transformation. There are so many people and animals in fairy tales that are either between states, or have been turned into something against their will."

The story is "about a postman who marries a raven, their union producing a daughter who looks human (at least at first) but feels like a bird underneath the skin"-which is very reminiscent of selkie stories.

Niffenegger also says about her research for the story:

"So I started reading a lot of fairy tales, and one thing that struck me was how matter-of-fact they are. People are seldom surprised in fairy tales, or if they are, they rapidly adapt. And I thought that whatever happens in my story, it should be surprising to the audience, but not surprising to the people it's happening to."

The ballet premiered in London this spring.
Posted by Kristin at 1:07 PM 3 comments: 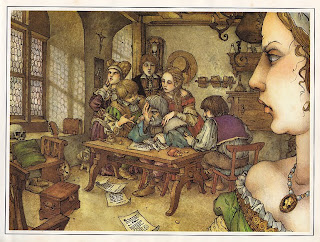 I have long called the Eilenberg/Barrett Beauty and the Beast my favorite children's book version of the tale (from whence comes the title picture of this blog), although many other fairy tale enthusiasts claim the Marianna and Mercer Mayer version as their favorite. After reading what Jerry Griswold had to say about it in his The Meanings of Beauty and the Beast: A Handbook, I definitely have a greater appreciation for this book.  Griswold's analysis made me go to my shelf, pull out my copy of the Mayer book, and pour over the pictures again; there's a lot going on that I never noticed on my own.

Mercer Mayer's illustrations accompany the text by Marianna Mayer. Many of the pictures emphasize one of the themes of the story: that of sight and looking beyond the surface. In most of the pictures (only a few are included in this post), notice the contrast between foreground and background. In doing so, he forces you to do one of the main messages of the story: to look beyond the surface; to go deeper. 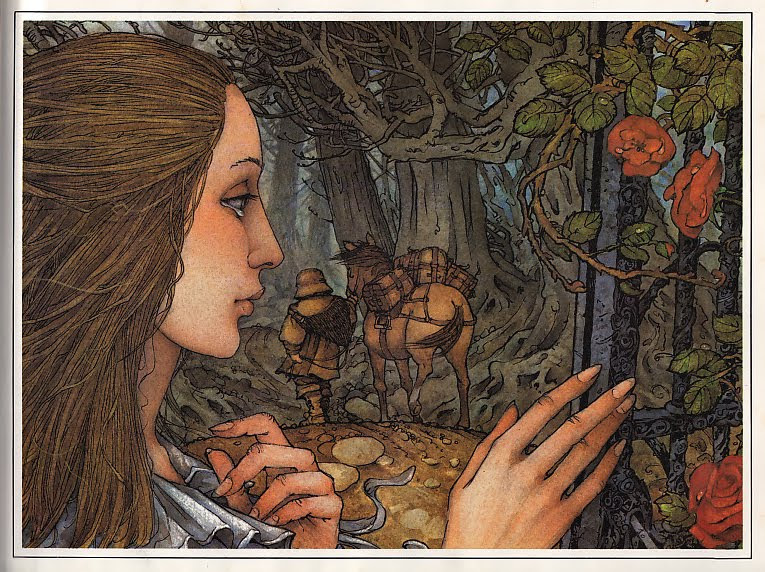 Mayer also contrasts the scenes that take place in the "real world" with the fantasy world with the color scheme-scenes in the home with Beauty's family have a brownish tint, while the Beast's castle is characterized by blues. 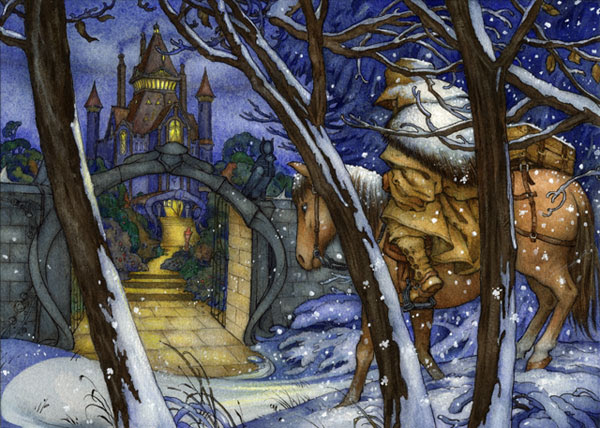 Like Walter Crane, Mayer includes animal decorations in the Beast's castle-but many of these animals are mostly specifically Egyptian (notice the scarab jewelry Beauty is wearing below), "the appearance of these quasi-animal deities seem connected to the fact that Mayer's Beast is a...magician, but their anthropomorphic nature...is also intimately connected to issues of the story." 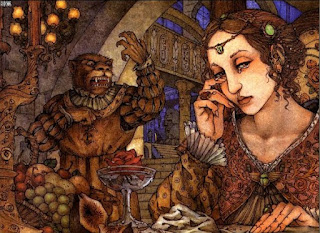 And hardly any illustrated version of Beauty and the Beast would be complete without roses, but Mayer uses even the amounts and colors of the roses to move the storyline along. When Beauty makes her request for the rose, roses appear subtly in the background and fabrics of the pictures. After Beauty's father picks the rose from the Beast's garden, the roses appear everywhere, and obviously.
Red roses tend to be associated with Beauty throughout, and white with the Beast. As the characters get to know each other, the red and white roses grow closer together. In the last picture, shown below, after the Beast's transformation, there appear pink roses for the first time. 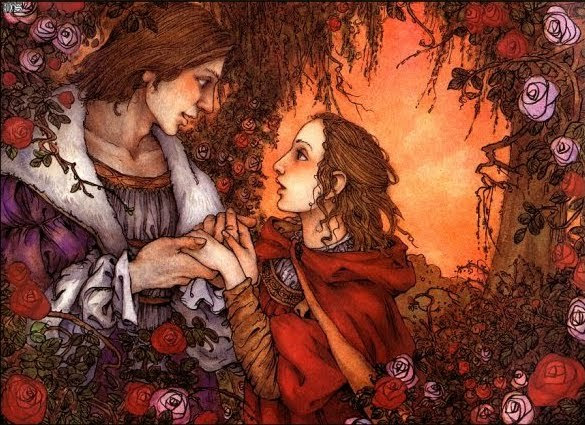 Doesn't it make you want to get the book yourself? There's even more! I don't want to give away everything, so as to encourage readers to read the Griswold book and the Mayer picture book for yourselves, but see what you notice about eye contact (when/with whom eye contact is made in the pictures) and the positioning of Beauty to the Beast throughout the story and what it reveals. Also in Griswold's book: a possible Jungian interpretation based on the last picture. Share what you discover in the comments!
Posted by Kristin at 6:39 PM No comments:

Ursula K. Le Guin on the importance of reading fantasy

fairy tale, legend, fantasy, science fiction, and the rest of the lunatic fringe. I believe that maturity is not an outgrowing, but a growing up; that an adult is not a dead child, but a child who survived. I believe that all the best faculties of a mature human being exist in the child, and that if these faculties are encouraged in youth they will act well and wisely in the adult, but if they are repressed and denied in the child they will stunt and cripple the adult personality. . [1]


Sadly it seems that we who love the realm of Faerie always find ourselves on the defensive when explaining our passion...it's good to be armed with quotes like this!
Posted by Kristin at 3:05 PM 2 comments: