Here's an Icelandic version of the Twelve Dancing Princesses tale; this one is a slightly morbid tale set at Christmastime!

Once there was a farmer who settled in the mountains. He had a housekeeper named Hildur who kept to herself but performed her duties well and was kind. Though the farmer was kind as well, he had trouble keeping shepherds, because one after another, they were all found dead in bed on Christmas morning. Hildur did not go to the Christmas mass like everyone else, but stayed at home to tend to her duties and prepare for the Christmas feast.

Finally the farmer decided not to employ any more shepherds, until a man came to him and offered his services for the winter. The farmer protested that those who had filled that same position met with a sad fate, but the man insisted he would still care for the sheep.

So he stayed with the farmer that winter, although on Christmas Eve thought it wise to stay awake. During the night, he saw Hildur approach him. He pretended to be asleep and felt her put a magic bridle in his mouth. She mounted his back and they rode to a chasm in the earth. There she dismounted; in order to follow her the shepherd rubbed his head against a stone until the magic bridle came off.

He followed Hildur, and noticed she did not act like the same housekeeper he knew. He took a magic stone out of his pocket that would make him invisible as long as he held it, and kept close behind her.

Finally they reached a great palace, where a great crowd of people came to meet her and a man dressed in purple in gold came to meet her, calling her his wife. The crowds called her their queen and treated her with respect. Two children ran into her arms and called her Mother. Hildur was given royal attire and together with her king sat down at a big feast, which was followed with dancing. But Hildur and the king did not dance, they sat and talked, and seemed to the shepherd to be very sad. At one point Hildur gave one of her children one of her rings to play with; after the child was done playing with it the shepherd snatched it up. 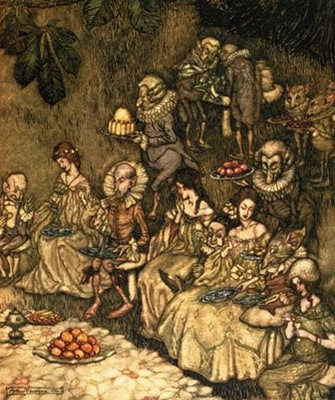 Finally Hildur made preparations to leave, which was met with protests by all except an old woman alone in the corner. The King begged her to stay, but Hildur said, "I cannot stay here, in consequence of the spell by which your mother has bound me, and who knows if I shall ever see you more." She told him that she had killed so many men that she would certainly be found out and punished, even though she had done it against her will.

The shepherd went back to the bridle and pretended to be asleep again as she rode him back to the farm. The farmer came in early in the morning, anxious to see whether or not this shepherd had survived through Christmas morning, and rejoiced to see him alive and well. He asked if anything strange had happened during the night.

"Nothing, except that I had a very wonderful dream." He then told the story of what had happened. Afterwards Hildur said, "If you tell the truth, show us some token to prove what you say."

The shepherd showed the ring. Hildur then said that he had delivered her from the spell that had been placed on her by her mother in law and told them the full story. She was a lowly fairy maid, but the fairy king fell in love with her. The marriage displeased his mother, who bound Hildur by a spell to become a servant in the world of woe, and every Christmas Eve, to kill a man, the only night she was allowed back to the fairy kingdom. She was to do this until she was convicted of murder and put to death, unless she should meet a man courageous enough to go with to the world of Fairies and bring back evidence. She thanked and blessed the shepherd for being the first man who dared venture into the dark roads that lead to Fairyland, but longed for her true home, and disappeared, never to be seen again in the world of mankind.

The shepherd later married and became a wise and successful farmer, but he always attributed his wealth  to Hildur the Fairy Queen.

Found in Surlalune's Twelve Dancing Princesses: Tales From Around the World; summarized by me

First image above, an illustration of Hildur, found on Wikipedia. No illustrator credited, but this excerpt from the same page is interesting:
"There are four Icelandic holidays considered to have a special connection with hidden people: New Year's Eve, Twelfth Night (January 6), Midsummer Night and Christmas night.[44] Elf bonfires (álfabrennur) are a common part of the holiday festivities on Twelfth Night (January 6).[45][46][47] There are many Icelandic folktales about elves and hidden people invading Icelandic farmhouses during Christmas and holding wild parties.[48] It is customary in Iceland to clean the house before Christmas, and to leave food fo the huldufólk on Christmas.[49] On New Year's Eve, it is believed that the elves move to new locations, and Icelanders leave candles to help them find their way.[50] OnMidsummer Night, folklore states that if you sit at a crossroads, elves will attempt to seduce you with food and gifts; there are grave consequences for being seduced by their offers, but great rewards for resisting."
Posted by Kristin at 10:50 PM No comments: 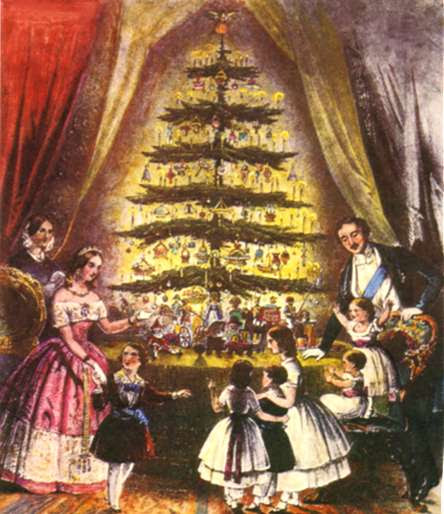