From the Archives: The Underground Kingdom

This is the first book I owned in the Surlalune series! My favorite fairy tale other than Beauty and the Beast is the Twelve Dancing Princesses, and it's incredibly hard to find anything written about it, so being able to delve into multiple variants--most of which were completely unfamiliar to me--was like discovering hidden treasure!One of the things which always fascinated/mystified me about this tale was the nature of the underground kingdom the Princesses travelled to each night-why did it need to be destroyed? Was it evil in any way other than being an inconvenience due to the rate at which the Princesses went through dancing shoes? The Grimm version provides no explanation. Fortunately the variants from around the world did provide some insight.In  many versions of this tale, the underground kingdom is more specifically defined as hell, or a land of giants, trolls, etc. In Afanasyev's tale from Russia, the Princesses went to the home of the Accursed Tsar.Some versions explain the nature of the Princess' curse. In Romania, "these Princesses were fore-doomed, and they couldn't marry until someone was found who would guess their doom and make one of them love him. The doom that weighed upond them was a passion for dancing. They were mad on dancing, and so every night they wore out a new pair of white silk slippers each."...later it is implied that another side effect of the curse was that they had icy hearts and were incapable of love, and that the music in the castle was enchanted such that any listener was forced to dance, whether willing or not. 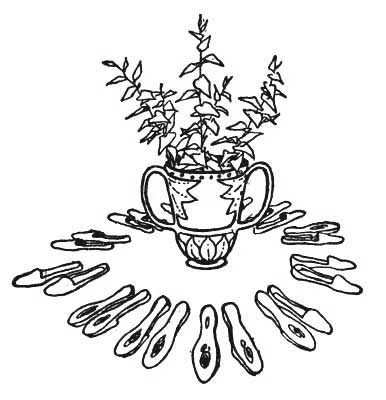 Helen Stratton
A German tale (not the Grimms') describes the spell: the princesses had been dancing for five years. If they had danced one more year, they (the Enchanted Princes, I assume) would have been saved. The other alternative was for the princesses' heads to be cut off, as they were, for denying everything. The exact words say the elder sisters had "allowed" their heads to be cut off, so I guess they sacrificially saved the princes from enchantment? Yet they are still punished and the daughter who confesses rewarded.Another story from Romania explains that the Princess' dancing partners were the "Emperor's sons who had tried to discover the secret of the Princesses. These latter had enticed them to a midnight expedition, and had given them to drink at table, an enchanted beverage, which had frozen their blood, killed in them every sentiment of love, every rememberance, or worldly desire, leaving them only the ardent pleasure of the dance." Which begs the question...where did the sisters go before there were dancing partners? Much like Bluebeard and the question of what caused him to kill his first wife, before there was a room of dead bodies to discover... 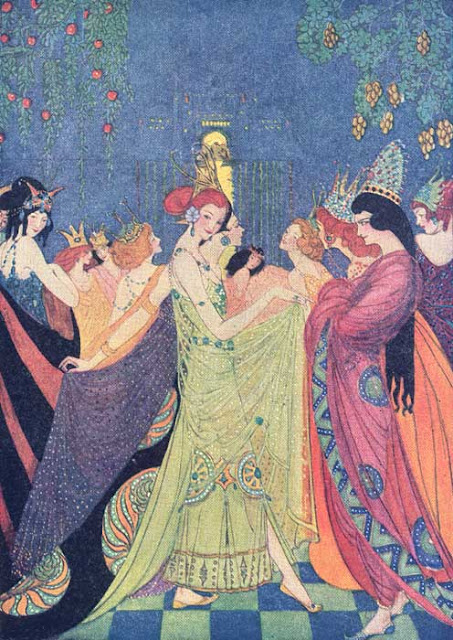 Elenore Abbott
In Hungary, the girls travel by broom to hell, where they dance on a floor full of razors-which explains why these three daughters destroy three hundred pairs of shoes. The girls in this story are rewarded according to their willingness to go-the older two had a lover and a son in hell and were killed, but the youngest was pure because she had no one there. Another very similar tale is found in the Czech Republic.Yet another Hungarian story describes sisters which spend the night dancing with fairy youths, who are killed (except the youngest) for witchcraft.

For more on the nature of the Underground Kingdom in variants of Twelve Dancing Princesses, there's also a Part II including more tales from around the world!
Posted by Kristin at 2:36 PM 6 comments:

Disability, Deformity, and Disease in the Grimms' Fairy Tales

I got a new book for Christmas! Disability, Deformity, and Disease in the Grimm's Fairy Tales by Ann Schmiesing. I had heard about it on Surlalune and the topic is one of special interest to me-although I'm mostly a stay at home mom now, I also teach a couple music classes to adults with intellectual disabilities. And I'm now amazed I've never realized how common a topic disability is in fairy tales before! 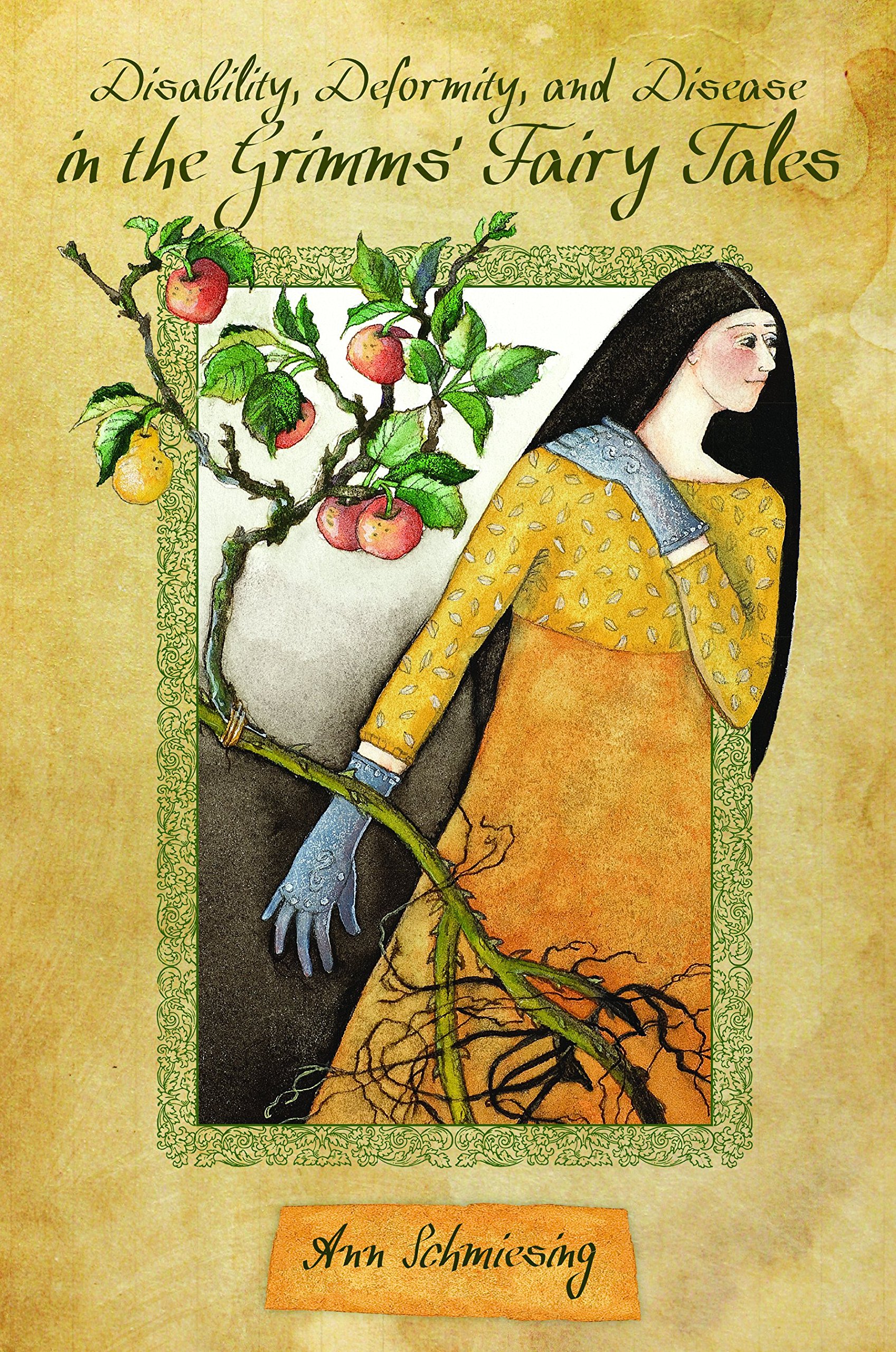 I've only read the introduction so far but I'm really excited to read more. As Schmiesing points out, there are very few studies done on the topic of disability in fairy tales, despite how often it occurs (think the birds pecking out the stepsisters' eyes in Cinderella, or thumbling tales, or many other examples the book will explore). In fact, disability usually functions in one of two basic ways: it sets a protagonist apart and gives them an extra challenge to overcome (such as thumblings) or is indicative of a villain, either by nature or given as a punishment. In fact, some form of disability is often the impetus of the story itself. David T. Mitchell suggests that the purpose of stories is to explain that which has "stepped out of line", and that understanding differences in people are one of the things that "propel the act of storytelling into existence."

Thinking of disability in broader terms, it's not surprising that it appears so often in the Grimms' collection. Wilhelm suffered from poor health, and his first son grew very ill and died in infancy. Because of poorer living conditions, illness and other disabling conditions were far more common during the Grimms' lifetimes, when the average life expectancy was only about 35.

Of course, the stories often treat disabilities in ways that aren't exactly politically correct today. Most people are aware of some of the issues in fairy tales when it comes to gender studies, but not as many people are aware of issues when it comes to people with disabilities in literature. The Grimms were a product of their time, as were their storytelling sources. When folklore scholars have attempted to tackle these issues they often lack sensitivity and awareness,  but many disability scholars may not have a proper grasp of fairy tale studies (Schmiesing cites one article that mistakenly assumed that the Grimms were not two collectors and editors, but one author, "B. Grimm"!!! I'm extremely intrigued as to where that "B" came from...) Interestingly, as Wilhelm edited the stories over the course of the editions, he tended to (probably unintentionally) enhance or add portrayals of disability.

Other authors, in Schmiesing's opinion have taken disability in folklore a little too literally, attempting to give various characters a specific diagnosis. This is often just speculation which ultimately misses the point of how the disability functions. Yet others don't take it literally enough-treating the disability as only a metaphor representing something else and ignoring crucial parts of the story. Fairy tales are certainly a challenging genre to study because of their nature, taking place in "a world in which metaphors take on literal meaning.," as she quotes from Maria Tatar. But from everything I've read so far, I think Schmiesing will strike that much needed middle ground, as someone who is aware of both disability and folklore study. Can't wait to read more!