From the Archives-The Evolution of Rumpelstiltskin

Although the significance of names is a topic of interest in the tale Rumplestiltskin, Jack Zipes sees the main connecting point in versions of the story to be their connection to spinning. Not all versions even have the famous name guessing scene, but all reveal common attitudes towards spinning. A good spinner could gain a reputation that would result in a better marriage, so spinning was very important to many women; however, the tales also reveal that the spinners may long to end their monotonous task if possible. Many of the stories "were probably originally told by women in spinning rooms [and] reveal how the spinners would actually like not to spin anymore, but use their spinning to entangle a man and to weave the threads and narrative strands of their own lives." 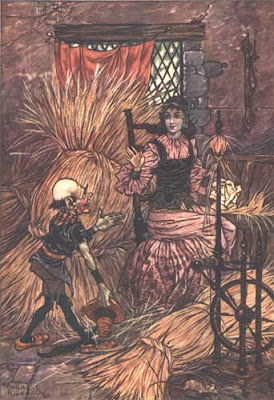 Basile's story "The Seven Pieces of Bacon Rind" from 1634 feature a girl who is lazy and a glutton. Her mother gave her seven pieces of bacon to make into soup, but the hungry girl ate all the bacon, and put old shoe leather in the soup to cover up what she had done. Her mother was furious when she found out and was beating her when a merchant walked by and demanded to know what would cause a mother to beat her daughter. The mother claimed that her daughter was so industrious, she had filled seven spindles, despite the fact that it was harmful to her health. The merchant offered to take the daughter home as his wife, where he would be happy to allow her to spin so enthusiastically.
The merchant bought twenty rolls of flax for his wife, expecting twenty rolls of spun flax from his wife when he returned from the fair in twenty days. His wife did no work whatsoever, but ate the merchant's food. Finally she realized she had nothing to show for the time her husband had been gone, so she squirted water onto passersby until a group of fairies were so amused they did her work for her. When her husband returned, she feigned illness because of her hard work, and her husband declared he would rather have a healthy wife than a sick and industrious one and told her not to do anything to exhaust herself.
In this version, though the main character is lazy, she can be at least credited with being clever. This may not have resonated with the Victorian values of hard work and industry, but modern audiences are probably more sympathetic towards someone who can figure out a more efficient way to get the job done by thinking outside of the box. Also, the husband is very kind compared to the future cruel King who threatens his new bride with death. 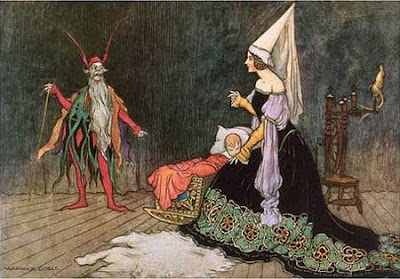 L'Heritier's "Ricdin-Ricdon" of 1705 is bogged down by descriptions of how beautiful and perfect the heroine, Rosanie, is, and how everyone else at the palace is jealous of her. Rosanie is not lazy and a glutton like her Italian predecessor, but simply a slow spinner with an abusive mother. Later it turns out there was a whole switched-at-birth thing and Rosanie is actually royalty although she was raised by simple folk, (actually kind of like Villeneuve's backstory for Beauty in her 1740 version of Beauty and the Beast). But here Rosanie is granted a magic wand that will spin for her, and if after three months she can remember the name which Ricdin-Ricdon told her, she would be free and out of his power. She forgets, and is all distressed until the prince reveals that he overheard a demon disguised as an old man telling him how he traps women who don't know that he is Ricdin-Ricdon. She safely returns the wand and has a "perfect union" with the prince and "extreme happiness." 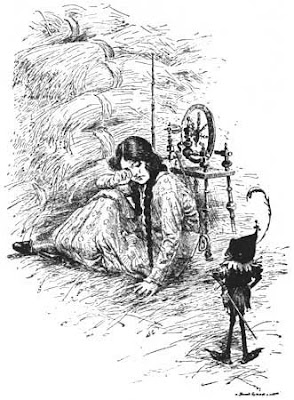 The Grimms have multiple versions of spinning tales in their collection. Most people are familiar with "Rumplestiltskin," which lays the blame on the father who claims his daughter can spin gold, and the King who demands gold or death from the maiden.

"The Three Spinners" is closer to the earlier French and Italian stories-a mother tells the queen her lazy daughter can't stop spinning, and she is expected to turn out more spun yarn than she can possibly manage. Three odd women offer to do her work for her, as long as they are invited to her wedding (she will win the Prince for her work). As they arrive, the groom is horrified by the girl's "ghastly looking friends," and asks how they came to have such a flat foot, drooping lip, and immense thumb; the three women reply it was from treading, licking, and twisting thread. The Prince declares his bride shall never spin again.

"The Lazy Spinner"  shows a wife trying to trick her husband into getting out of spinning, first by scaring him (becoming a voice in the woods who calls, "He who chops wood for reels shall die in strife. She who winds yarn shall be ruined all her life") and then by substituting the skein of wool with a clump of tow, and allowing her husband to think it was his fault because he had done something wrong, so he doesn't mention it again.
I think "The Three Spinners" is my favorite, which is yours?
Illustrations by Charles Folkard, Warwick Goble, and John B. Gruelle. Information from Jack Zipes' The Great Fairy Tale Tradition
Posted by Kristin at 9:26 AM 4 comments:

I'm a big fan of the blog Multicolored Diary, run by storyteller Csenge Virag Zalka. When I heard about her book, Tales of Superhuman Powers, I was immediately intrigued and put it on my wishlist. For anyone who wants to learn more folktales, and also enjoys a good superpower story, this book is SO MUCH FUN. 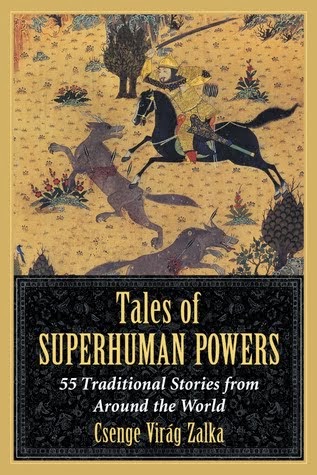 Which is not to say that all the tales it contains are "feel good" stories- there's a good mix of happy endings with tragic tales and chilling warning tales. But the concept is so enjoyable-she has the tales organized by superpower, so you can choose to read about people with superhuman strength, speed, invisibility, elemental manipulation, etc. Before each tale, Csenge includes information on the ability, the source of the power, origin of the tale, teachings, age groups it's appropriate for, information on tale variants, and a list of popular heroes with that same power from Marvel, DC, etc. After each tale she provides comments, which I especially like. So often a tale will have really bizarre, or disturbing, elements and you're left wondering what to make of it. With her vast storytelling experience, I'm beginning to see that often, stories with puzzling or hard to read parts are the ones that lead to better discussions afterwards-something that has been lost as our own fairy tales have become printed in books or translated to the screen rather than told orally. Many tales were probably meant to prompt the listener to say "that's not fair!" or ask questions, not to be its own neat little morality guide as many printed fairy tales around the Victorian era were.

All the tales are interesting, but so far some of my favorites are the ones about the power to make drawings come to life-not a power you run into often! I highly recommend this book to anyone-it's great for those that know nothing about fairy tales beyond pop culture, because superpowers are a pretty universal interest, but it also contains really unique tales that are probably new to all but those who have thoroughly researched world folklore. Almost every single tale in the book was completely new to me (although some are familiar from being referenced on Multicolored Diary).
Posted by Kristin at 8:47 AM 6 comments:

Weekend eye candy, found via Megan Kearney. Concept art for the 2017 Beauty and the Beast by Karl Simon (go to the linked site for larger, and more, pictures-). Labels: artists, Beauty and the Beast

Fairy Tale Roundup Newsletter-have you signed up yet? Get monthly highlights from Enchanted Conversations, World Weaver Press, Timesless Tales, and Once Upon a Blog delivered right to your inbox!

Fairy Tale Footnotes-everyone's favorite fairy tale news hound, Ink Gypsy (of Once Upon a Blog), has started another blog with more of her personal reflections and day to day encounters with fairy tales! Lots of great posts are already up. I particularly enjoyed reading about C.S. Lewis and Tolkein's thoughts on Disney Dwarves, and seeing the matroyshka doll based off of Koschei's hidden heart! 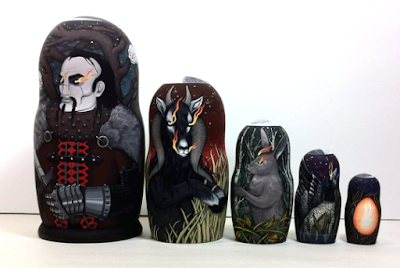 At Multicolored Diary-I've been loving Csenge Zalka's series on folktales around the world-she brings her impressive knowledge to shed light on folktale collections from all around the world, lots of fascinating stories and patterns of stories! She also just finished her A to Z challenge, WTF, Weird Things in Folktales. Some really bizarre, and very amusing, tales to read about!