For any Chicago area folk who might be interested, here's a link to the Tribune's review of Amanda Denhert's "Peter Pan (A Play)." The review itself is pretty negative, so it might discourage anyone from buying a ticket, but it's always interesting to see how people interpret classic stories in different ways. 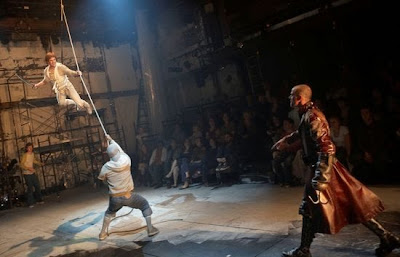 An exerpt: "This "Peter Pan" loses almost all of the sharp contrasts in Barrie's writing, fails to hold on to the narrative thread of his storytelling and flattens everything into an overwrought and tediously theatrical landscape. More problematic yet, the piece feels weirdly clueless about parents and children, which is the very core of a book that, while strange, surely hits on some of most painful truths of our home lives.
"Peter Pan," which was born out of an unusual and now well-documented, turn-of-the-century friendship that Barrie had with a family of five boys, can be played darkly or lightly or (ideally) on twin tracks for kids and adults."

I love that last line and think it applies to most stories-"Can be played darkly or lightly or (ideally) on twin tracks for kids and adults." I believe good children's stories should also have appeal for adults and that it's totally possible to achieve that balance, as the original Barrie play itself proves.
Posted by Kristin at 9:36 AM