What happened to the children of Hamelin? 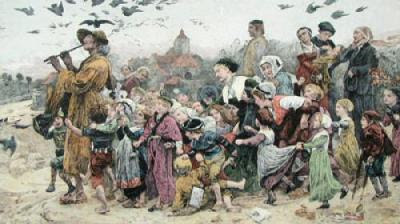 The story of the Pied Piper may actually have roots in historical fact. While the Pied Piper himself may be symbolic, a Death figure, town records in the town of Hamelin, Germany from the year 1384 say, "It is 100 years since our children left." Many have speculated on what it was that took the children away-a plague, the children being sold, a children's crusade, etc. The theories can be read about on wikipedia.

The brothers Grimm drew from eleven sources to create their tale, but I searched through my copy of complete Grimm fairy tales and couldn't find it. The Grimms published many works other than their Children and Household Tales, and again according to Wikipedia, this one was published in their "Deutsche Sagen"-which makes sense if this was believed not to be a fairy tale but based on actual events. Their version includes two children which were left behind because one was blind and one was lame.

Also, I realized that I had no idea what the word "pied" means, and it means "multi-colored," referring to the clothes he wore. 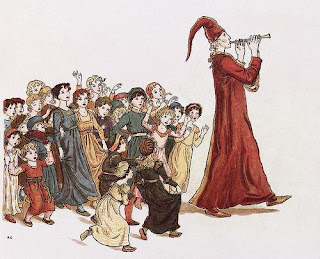 I also found this interesting: "Reportedly, there is a long-established law forbidding singing and music in one particular street of Hamelin, out of respect for the victims: the Bungelosenstrasse adjacent to the Pied Piper's House. During public parades which include music, including wedding processions, the band will stop playing upon reaching this street and resume upon reaching the other side." 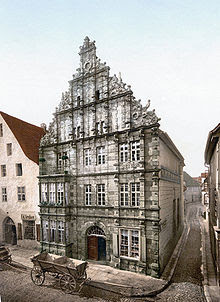 No, the Pied Piper didn't live here, but there's an inscription on the side of the house about the event, which supposedly happened on June 26, 1284.
Posted by Kristin at 8:55 AM