"The Red Shoes" is a tale by Hans Christian Andersen, one that really reveals his tendency to condemn a young girl, in this case for her vanity, and make her suffer incredible punishments that seem to far outweigh the crime.

Karen, the protagonist, struggles with vanity long before she even comes into contact with the fateful shoes. "People said that she was pretty. But the mirror told her, 'you are more than pretty-you are beautiful.' " A throwback to Snow White's evil Queen, perhaps, another vain character known to listen to her mirror? 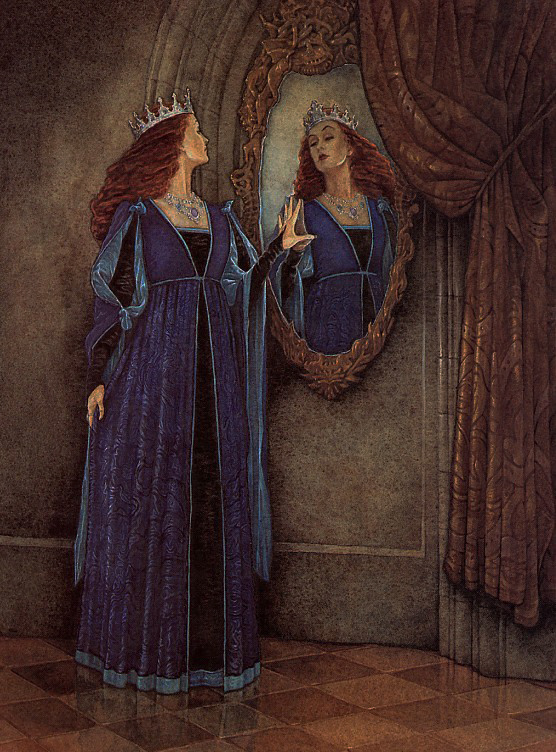 "Mirror Mirror on the Wall"-P J Lynch
Karen chooses red shoes for her confirmation, causing everyone to stare at her shoes the whole time. She continues to wear them, despite how "improper" they are to wear to church. She is no longer able to focus, but thinks of her shoes the whole time-"she forgot to say the Psalm, forgot to say the Lord's Prayer."

The first time Karen danced a few steps in the shoes, she found she couldn't stop, until the shoes were removed. She still thinks about the shoes even when she isn't wearing them, and finally wears them to a ball. This time she starts dancing and can't stop. After dancing for days, past meadows and fields, she is condemned by an angel: “Dance you shall,” said he, “dance in your red shoes till you are pale and cold, till your skin shrivels up and you are a skeleton! Dance you shall, from door to door, and where proud and wicked children live you shall knock, so that they may hear you and fear you! Dance you shall, dance—!”

She even passes a funeral for herself, and knows "she was forsaken by everyone and damned by the angel of God." Nothing can help her until she goes to the executioner and asks him to chop off her feet. Even the first time she tried to go to church again, the red shoes were still there, dancing on their own, and she had to repent of her sin.

After that she became the image of piety, "industrious and thoughtful," and when children "asked her about dress and grandeur and beauty she would shake her head." After living in humble piety for a while with her crutches, one day she is taken up to Heaven, "and no one was there who asked after the Red Shoes." (Italics part of the story, not my emphasis).

All that for a pair of shoes seems rather extreme, but wikipedia includes this pertinent background information: "Andersen explained the origins of the story in an incident he witnessed as a small child. By his report, his father was sent a piece of red silk by a rich lady customer, to make a pair of dancing slippers for her daughter. Using red leather along with the silk, he worked very carefully on the shoes, only to have the rich lady tell him they were trash. She said he had done nothing but spoil her silk. "In that case," he said, "I may as well spoil my leather too," and he cut up the shoes in front of her."

So Andersen may have had bitterness towards the rich more than towards women and girls especially. She originally wants red shoes because she sees a princess wearing them.

This paper by Anastasia Yuanita sees the story as cautioning children more about obedience than vanity. Karen tricked her adopted mother into buying her red shoes, and wore them over and over again after being told not to. As far as we know, the princess in the beginning was never condemned for wearing her red shoes, so her sin could be idolizing the shoes more so than just wanting and wearing the shoes in and of themselves, good news for any of us who happen to own red shoes. Plus, extremely didactic tales enforcing children's obedience were pretty much the norm at the time.

However, when you look at this story in combination with Andersen's others, you really do start to notice a pattern. Inger of "The Girl Who Trod on a Loaf" is given even more dire punishment. This girl is bad, cruel, and proud-even despite her poverty. In her vanity and foolishness, she uses a loaf of bread given to her to place in the mud to keep her shoes from getting dirty. For this she becomes a statue in the underworld, forced to hear the voices of people up above telling her tale as a warning against wickedness, and she wishes she had never been born, and that people had punished her more for her waywardness.

In contrast, the good heroine of "Snow Queen," Gerda,shows her devotion by throwing her red shoes, her "treasure," into the river. (Interestingly, although you can find illustrations of Gerda with and without shoes, I haven't found any pictures of her wearing those red shoes, has anyone else?)

I couldn't help but wonder how much of Andersen's attitude towards red shoes were universal, and how much was his own, so I did a little digging.

From BBC News: "In the 1670s, Louis XIV issued an edict that only members of his court were allowed to wear red heels. In theory, all anyone in French society had to do to check whether someone was in favour with the king was to glance downwards. In practice, unauthorised, imitation heels were available."

Louis XIV's shoes in a portrait by Hyacinth Rigoud
This lecture tells us that "woman in red" was basically a code name for "prostitute" in England and France in the nineteenth century. Prostitutes could also be identified simply from their dress-being overdressed according to cultural wardrobe norms.

Yet, red shoes couldn't have been a universal symbol for wanton sexuality, especially (one would assume) if there were pairs available for little girls. Plus, in the Grimm's The Juniper Tree, when the brother is resurrected as a bird, he rewards his sister Marlene by bringing her a pair of red shoes from the shoemaker. Marlene is only represented as good and kind, and was thankful for the present.

In fact, I'm finding it difficult to research the importance of red shoes in nineteenth century Europe. It seems shoes of many different colors were fairly common, especially by the mid-1800s. 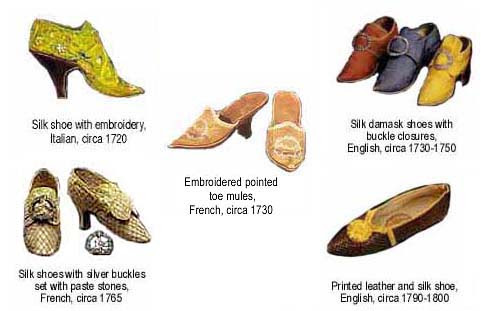 A pair of red shoes pictured among other colored shoes 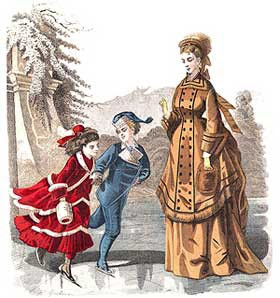 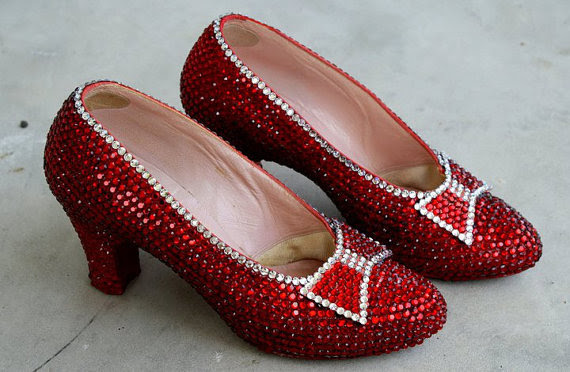 House of Harry Winston's Ruby Slippers-created from diamonds and rubies for the 50th anniversary of "The Wizard of Oz," these are supposedly the most expensive shoes in the world ($3 million)

And to bring it back to the Snow White reference at the beginning- if you missed it the first time, you should definitely check out Gypsy's post on the red-hot iron shoes Snow White's evil stepmother was forced to dance in. Here's the warning:
Warning:
This post is NOT for everyone.
It discusses historical torture methods.
Skip this if you have a sensitive stomach.

There are so many other fairy tales that deal with shoes in general, so I tried to keep this post limited to discussion of red shoes specifically (although you could also throw in the stepsisters from Cinderella-after putting their mutilated feet into Cinderella's slipper the trickling red blood is what tipped the Prince off to their deception). Any thoughts on the symbolism of red shoes in fairy tales, and/or historical facts about red shoes?
Posted by Kristin at 1:48 PM