Diamonds and Toads and Cats

I was surprised to find, in Puss in Boots and Other Cat Tales From Around the World, a category dedicated to "The Kind and Unkind Girls", also known as "Diamonds and Toads". 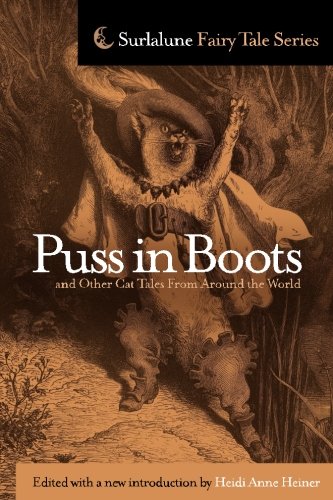 In a couple tales from Greece and Italy, the cats are actually the ones who reward/punish the girls! "The Cats" from Greece features a household of cats that reward an old beggar woman-refreshing to see a heroine who is a different age. "Little Convent of Cats" from Italy includes the detail that it was from the time when all animals could speak, and the cats were very rich (in some of the tales the cats speak, in others they use actions to show the heroine what she should do).

In the other tales, though, the cat is a friend that helps her because she is kind enough to feed it. Sometimes there's a cat and a dog who are provided for her as helpers at the house where she takes up service for the old witch/benefactress figure. In an Austrian tale, the cat and dog were an enchanted Prince and his sister (and the Prince marries the heroine). In the others they appear to be regular animals who just appreciate being shown kindness and help her fulfill impossible tasks and/or choose her reward for service wisely; when the unkind sister shows up and is cruel to the animals, they simply let her suffer.

Reading several "Diamonds and Toads" tales back to back, certain themes emerge. One theme that's very prominent in many fairy tales is that, if you are kind and compassionate, those who you help will return the favor when you need it. The animals that the heroine gave food to helped her accomplish tasks like fill a seive with water, or provided her with food and drink when she needed it. The animals were also key in the episode at the end of her service when she was given a choice as to her reward-they showed her which box/basket to choose that would really be full of treasure, no matter how unassuming it looked at first. And of course, whatever the good heroine does, her wicked sister does the opposite-mistreats those she comes across, is a lazy worker, and chooses whichever payment she thinks will bring her the most rewards.

It's clear that the kind sister is also rewarded not just for being kind to people, but also to animals and nature. In some tales she helps and respects various other things, from a fence, to trees and a brook, which also help her in some way later. The whole idea of being kind to the earth is even more pressing in our current day and age, and certainly we and future generations will benefit it we make wise choices now.

Another key difference between the sisters is their expectations. The kind sister is rewarded because she is kind no matter what-even when it seems like it won't benefit her at all, but because that's who she is. She also doesn't assume that she deserves a large payment for her services and is surprised to find treasures (which in these stories, never came out of her mouth as in "Diamonds and Toads," which would really be  quite unfortunate). The other sister only goes out in order to get the same treasures, is a lazy worker who doesn't share her food with the less fortunate or respect the earth around her, and doesn't suspect that it was the kindness that led to the original reward.

In fact these tales love to come up with various ways to torture the cruel sister and her mother. The box/basket she chooses as her payment is filled with everything from snakes and beetles, to devils and demons, to flames that burn her and her house down. Sometimes there's a bear that knocks on the door and wants to eat the girls, and the wicked sister from "Little Convent of Cats" ends up with a donkey's tail growing out of her forehead.

Other notable features of these stories: One features a girl being curious and doing what she shouldn't do, but rather than being punished it's seen in a positive light-she was told never to open the pots in her house of service. But before she leaves, she wonders what's inside and opens them, and poor souls fly out and thank her for releasing them.

Another story from New Mexico has an interesting parallel to Little Red Riding Hood. It's one of the tales where a bear comes knocking each night-the kind sister is told by the cat how to avoid it, but the unkind sister lets the bear in, and there follows a series of "What big X you have," which the bear follows with "The better to X with" and all accumulating, of course, with the big teeth that are all the better to eat you with (although this cat saves the unkind girl for her sister's sake).

Illustrations by Margaret Evans Price
Posted by Kristin at 10:07 AM