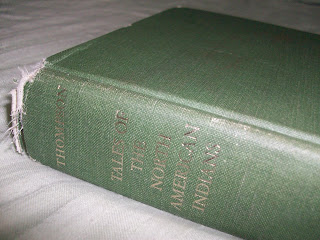 There are so many well-known Western tales, but so many other cultures full of rich and fascinating folklore. When I saw this book of Native American tales at the library, it appealed to me especially because my adopted brother is half Cherokee Indian.

It was really good to experience tales that weren't influenced by Western tales at all--though Eastern Europe and Asia have their own stories, our stories have influenced each other. For example, we think of Cinderella as a European tale, but the earliest known versions are from Egypt and China (origins are debatable, but it makes sense that it could have originated in China, with their obsession with foot binding to produce unusually small feet).

I didn't read the whole book, I skipped the mythological stories and went for categories like "Journeys to the other World" and "Animal Wives and Husbands." Even if I had read every single tale, it wouldn't have been truly representative of all Native American folklore, but here are some observations I had from what I did read:

-Death is not final. Often, protagonists that die are resurrected by friends or family, although antagonists generally stay dead.
-Polygamy
-In the Animal Wives and Husbands section, the line between sexuality and beastiality is kind of blurred. The line between human and animal is also blurred, as some people can change back and forth, without a clear notion that being animal is especially bad. In general, Native Americans felt very strongly connected to Nature, so that would naturally be reflected in their folklore.
-Romance is not a big deal. In most European tales that involve people, the tale starts out with a single guy and a single girl. By the end they're married and that indicates the happy ending (along with wealth/royalty). In Native American tales, they might start out married and one of them will have a test of loyalty (although it seems a big offense for women not to be loyal and not as much for a man). In general, loyalty towards your married partner is highly valued.
In the tales where people do get married at the end, it's not a big deal. It's more like "so she went and found herself a husband and they were married."
(by the way, doesn't it seem that in any modern movie that starts with a happy couple, one of them ends up dead? We just don't like following a couple after they get together--either that or don't really believe people can stay in love)
I also wonder if the lack of emphasis on romance has to do with the polygamy. Marrying that special guy doesn't mean as much when he might add another wife or two later on.
-Lastly, in case all the chauvenism is making you angry, this should make you feel better-men seem to cry a lot. One tale had a man sitting down and crying because all his brothers got a wife and he didn't. Women don't really cry at all from what I remember.
Posted by Kristin at 12:30 PM