How children played butcher with each other

The Annotated Brothers Grimm by Maria Tatar has an Adult Tales section in the back, which is intruiguing, especially considering that morbid tales such as The Robber Bridegroom, Fitcher's Bird, and the Juniper Tree are in the regular section. The tales in the adult section aren't necessarily more violent than the above tales, but either racist ("The Jew in the Brambles") or violent in such a way that is condoned because it's a cautionary tale, but such that goes to extremes. 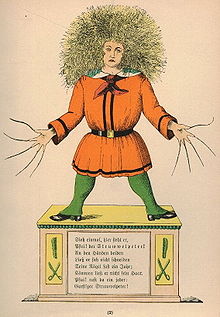 This was actually quite typical for Victorian children's stories, as can be evidenced by Struwwelpeter-a collection of German tales featuring children who suffer drastically for their mistakes, including: a girl who plays with matches and is burned to death, a boy whose thumb sucking results in his thumbs being cut off by giant scissors, a boy who goes outside during the storm and is carried off by the wind, "presumably to his doom"...you get the idea. Struwwelpeter himself is the cautionary tale about the importance of good grooming, the consequences of which are pretty severe, according to this picture on the left.


So maybe it's not just the violence that makes this tale disturbing, but the matter of fact way it's told:

"A man once slaughtered a pig while his children were looking on. When they started playing in the afternoon, one child said to the other: "You be the little pig, and I'll be the butcher," whereupon he took an open blade and thrust it into his brother's neck. Their mother, who was upstairs in a room bathing the youngest child in a tub, heard the cries of her other child, quickly ran downstairs, and when she saw what had happened, drew the knife out of the child's neck, and in a rage, thrust it into the heart of the child who had been the butcher. She then rushed back to the house to see what her other child was doing in the tub, but in the meantime it had drowned in the bath. The woman was so horrified that she fell into a state of utter despair, refused to be consoled by the servants, and hanged herself. When her husband returned home from the fields and saw this, he was so distraught that he died shortly thereafter." 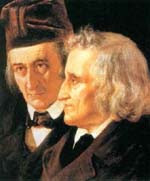 According to Tatar's notes, the Grimms got complaints that this tale was violent and defended it because of its valuable lesson, Wilhelm saying, "My mother used to tell the story about the butchering when I was young, and it made me careful and apprehensive about child's play." Despite this reasoning, the tale didn't make it to later editions of Children and Household Tales.

I have lots of experience watching children play, and I think they have a pretty good sense that their play is not real, and they use imagination and not literal imitations even when copying adult behavior. Yet the concept of the potential for children to be cruel to each other mixed with their ignorance does make this a chilling tale that could possibly be made into a horror film...I'd watch that, if it was made well.


There is another version of this tale also found in Grimms that reads more like a news story-more specific, including the town name and ages of the children, and at the end the child in question is asked to choose between an apple and a coin, and as he chooses an apple, he is deemed innocent. It seems almost more upsetting to let the child get off scot free for murder simply because he didn't know any better. This article by Donald Haase has an interesting interpretation I hadn't considered-some fairy tales were not meant for children but may express adults' fears about parenting and raising children. The choice of apple verses coin represents the division between concrete and abstract thinking-something I understand as a teacher of students with developtmental disabilities who, in general, never go on to abstract thinking. The article discusses other aspects of this tale and is very interesting reading, so I recommend clicking through.
Posted by Kristin at 10:57 AM