A tale about the tale of Bluebeard 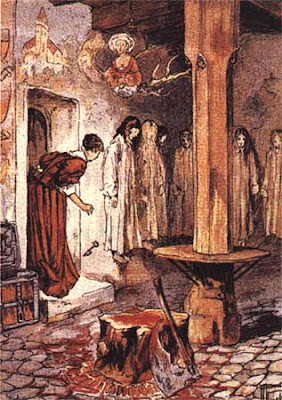 I was babysitting three girls and the oldest was going through a phase where she HATED Disney Princesses, she only liked villains. She only liked scary things and her favorite color was black. So when it came to story time, I tried telling Beauty and the Beast, my go-to, but it wasn't scary enough because there was no villain. I told them Swan Lake, and she liked that better because of Von Rothbart, but still wanted scarier. So finally I said, "Okay, you really want scary? Then I'll tell you the story of Bluebeard."

In retrospect this was pretty dumb. She was only 5 or 6 at the time and had two younger sisters there. Her parents had asked me a while before this to kind of ignore the subject of death if it came up-these parents also later made us mute the volume of Katy Perry's "Hot n' Cold" every time we played it on Wii dance when she sang "PMS" because they told them it was a swear word, so they're pretty protective-which is something I should have respected at the time. But anyway, I told it, and Caroline (the oldest) seemed to like it and I hope the younger two weren't traumatized.

It was later that night when her parents came home that I really regretted it. Caroline was very excited to tell her father the stories that I told them, including, "And THEN she told us about BLUEBEARD!" and I was like, oh no, oh no-what was I thinking telling the story of a serial killer to three innocent little girls? The parents are going to fire me and this is my favorite family to babysit!

In this instance, the relative obscurity of the fairy tale in America was my salvation. Her dad laughed and said, "Oh, you mean Redbeard the Pirate?" and thought no more about it.
None of the girls ever mentioned Bluebeard again, and they turned out fine, but I still shouldn't have told it with the younger two there, and not when the parents clearly wouldn't have wanted me to. Raising your own children is COMPLETELY different than taking care of someone else's, and as I've said before, as a teacher and a babysitter, what you say to kids really can come back to haunt you so you have to be really careful. But at times, children can surprise you with what they're ready for...
Posted by Kristin at 8:55 PM