Disney for the involved parent

Had a conversation with some friends today, and one of them has a professor who has a rule that his little girl is not allowed to watch Disney movies without him. He discovered that his daughter had seen Disney's Cinderella at a friend's house, and sat down to watch it with his daughter, "explaining" everything to her along the way. 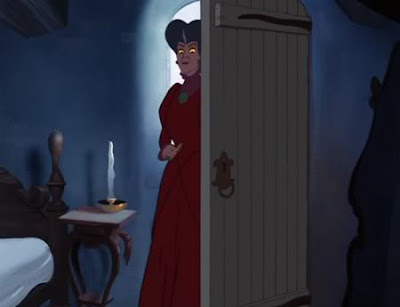 For example, in the scene where the Stepmother locks Cinderella in the tower, the professor stopped the tape and said, "what are some ways Cinderella could get herself out of the tower?" and his daughter came up with several ideas (including tying bedsheets together and lowering herself out the window).

From this article by Libby Copeland:
"I suppose I could confiscate our daughter’s Disney-fied Cinderella book, but that feels like a step too far. She’s a pretty major figure, and our daughter will come across her sooner or later. I would rather take charge of this story than let someone else tell it. And when our daughter is much older, able to grasp historical context and possessed of that child's fascination with darkness, I hope she’ll read the historical versions of the tale, including the one where Cinderella chops off her stepmother’s head, and another in which Cinderella’s stepsisters chop their feet to fit them in that glass slipper. They’re all delightfully sinister—just not for a toddler’s ears."

So though the older Disney movies have become, in some ways, obsolete in today's culture, there are still ways to interact with your child and learn from them without condoning everything in them-because let's face it, there's no way you can sheild your child from Disney, even if you were to attempt such an extreme. And really, I think parents and mentors should treat more media this way, because what movie is perfect on its own, or couldn't lend itself to good discussion and bonding with your child?
Posted by Kristin at 8:41 PM