Nightwish's new album, Imaginaerum, won't officially be released in the US till January, but the music video for "Storytime" can be viewsed on youtube, and the lyrics for the whole album on their website.
I've always liked that songwriter Tuomas Holopainen references both fairy tales and Disney in his songs-(contrary to what is often thought, like by the makers of the show "Once Upon a Time", Disney and fairy tales are not one and the same, but Holopainen references both often). The above song references the power of tales and stories-something I think we can all relate to here. 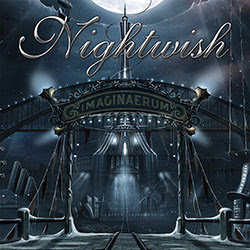 The album, using a creepy carnival as inpiration, seems to be an adult searching for the wonder and awe of childhood, but at the same time very mindful of that primal fear that children experience as well. And while we adults tend to think we're too intelligent to get scared of things that go bump in the night, often we're just operating under the illusion of control-life is so uncertain and precarious. Not that we should be paranoid all the time, but I'm glad the album isn't one-sided and either idealizes childhood or views life as hopeless.

The album contains many other references to fairy tales and classic fantasy characters-Alice, mermaids, etc., and also some less obvious ones-one song (I Want my Tears Back) contains the line "the voice of Mary Costa." It takes a more hardcore Disney fan to recognize this as the woman who voiced Disney's Sleeping Beauty.

I've mentioned Nightwish before, and again, their music isn't for everyone-but if dark creepy carnival-inspired symphonic metal sounds like a good idea to you, you'll probably really like this album.
Posted by Kristin at 7:42 PM