I found a copy of Politically Correct Bedtime Stories by James Finn Garner at a resale shop and snatched it up. It's great for an easy read and lots of laughs. Garner pokes fun at well-known fairy tales, as well as those who get too easily offended. 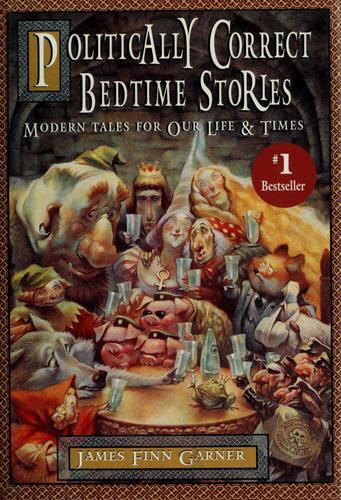 Book description: "Once upon a time, in the olden days, heavy-set middle-aged men would congregate in their elitist clubs, sit in overstuffed leather chairs, smoke air-choking cigars, and pitch story ideas and plots to each other. Problem was, these stories, many of which found their way into the general social consciousness, reflected the way in which these men lived and saw their world: that is, the stories were sexist, discriminatory, unfair, culturally biased, and in general, demeaning to witches, animals, goblins, and fairies everywhere.
Finally, after centuries of these abusive tales, which have been handed down-unknowingly-from one male-biased generation to the next, James Finn Garner has taken it upon himself (that's right, yet another man) to enlighten and liberate these classic bedtime stories and retell them in a way that is much more in keeping with the society in which we live today."

An exerpt from Garner's take on Rapunzel:
"Now, this witch was very kindness-impaired. (This is not meant to imply that all, or even some, witches are that way, nor to deny this particular witch her right to express whatever disposition came naturally to her. Far from it, her disposition was without doubt due to many factors of her upbringing and socialization, which, unfortunately, must be omitted here in the interest of brevity.)...the witch took the child deep into the woods and imrisoned her in a tall tower, the symbolism of which should be obvious. There Rapunzel grew to wommonhood. The tower had no doors or stairs, but it did boast a single window at the top. The only way for anyone to get to the window was for Rapunzel to let down her long, luxurious hair and climb it to the top, the symbolism of which should also be obvious."

Politically Correct Holiday Stories: For an Enlightened Yuletide Season
Posted by Kristin at 10:45 AM