In some cases, like Sleeping Beauty and Cinderella, traditional fairy tales have been made into successful ballets. In others, like Swan Lake, the ballet version gave it popular fairy tale status. Other ballets, however, have plots that are essentially fairy tales yet are only known to the ballet crowd and not as much in the fairy tale world. 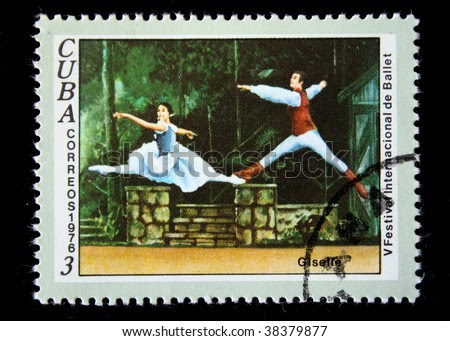 Giselle begins in a small village tucked away in a forest, where a lovely girl loved to dance. She loved to dance so much that it worried her mother, who knew that Giselle was not very strong, and she did not want her daughter to become a Wili-the spirit of a girl who died of a broken heart. Each evening they rose and came to dance in their white dresses, and if any man came along their path, they surrounded him and forced him to dance until he dropped down dead.

But happy-go-lucky Giselle did not heed the warnings; she just loved to dance.
Giselle was in love with a young man who called himself Loys, but unbeknownst to Giselle, he was really the Count Albrecht in disguise as a peasant. He had fallen in love with Giselle, but was already engaged to someone else.
That did not stop the lovers from flirting. Albrecht pledged his love to Giselle, and to test it, she picked up a flower to play "he loves me, he loves me not"-and was dismayed when the last petal revealed "he loves me not." But Albrecht claimed she had made a mistake, and invited her to dance.

Their dance was watched, however, by another-Hilarion, who was also in love with Giselle, and jealous of Albrecht. As Albrecht took the liberty of kissing Giselle on the lips, Hilarion broke them up-just as the other villagers started to arrive, celebrating the harvest. They urged Giselle and Albrecht to join them in dancing, and Giselle was spinning and laughing, until she began to sway and stumble and fall. Albrecht caught her, and Giselle claimed she was fine and wanted to continue dancing, but her mother stopped her.

The village was joined by a hunting party from a nearby castle, including an exquisite lady named Bathilde, who was kind to Giselle, and Giselle was in awe of her riches. Giselle told her she loved to dance, and Bathilde asked her to dance for them. Giselle was only too happy to oblige-though her mother was not-and afterwards Bathilde rewarded her with her own necklace. Giselle was also crowned Queen of the Harvest, and urged to dance again for the villagers. Giselle begged her mother to oblige them, and her mother finally relented. Giselle danced, ending by taking Albrecht's hand-but Hilarion came forward to reveal that Albrecht was not like them. He had a nobleman's sword and hunting horn. It was then that Bathilde recognized him and revealed his true identity, and his betrothal to herself.

Giselle screamed and ripped off the necklace and stumbled into her mother's arms.

Then, she flung back her head, rose, stumbled, and laughed the joyless laugh of a madwoman. She slowly began to dance, imitating all the actions between herself and her lover earlier in the day. She fell down, exhausted, but surprised everyone by grabbing Albrecht's sword and trying to kill herself, but he grabbed it from her.
Giselle began to dance again, wildly, getting faster and faster. Finally she fell, and pointed to something in the distance. "How pretty they are in their long white dresses," she whispered. She died.

That evening, Hilarion placed a cross of wood at Giselle's grave, and hurried away before darkness fell. Shortly afterwards emerged Myrtha, Queen of the Wilis, and she called the other Wilis out to greet their newest member. Giselle emerged, now one of them, and leapt across the clearing.
Albrecht came then, with lilies for Giselle's grave. Giselle stepped forward. Albrecht sensed something, but could not see her. But the other Wilis were returning, dragging in Hilarion and throwing him at Myrtha's feet, who ordered him to be danced to death. They encircled him, forcing him to dance until he was exhausted, but they forced him to dance still. Finally they herded him to a nearby lake and pushed him over.

The Wilis turned on Albrecht next. Giselle pleaded for him, but the other Wilis would not relent. Giselle lead Albrecht to the cross on her grave, which would protect him. Myrtha urged Giselle to dance, and then watched as the dance drew the lovers further from the cross. They danced together, and then Myrtha ordered him to dance alone, faster and faster until he too fell. Again Giselle pleaded for his life, but Myrtha had no mercy. Giselle urged Albrecht to last until sunrise, when the Wilis would scatter, but he could not. He fell, moments before morning bells rang out and the Wilis disappeared. But he was still alive, saved by Giselle's love.

This story was summarized using the book Of Swans, Sugarplums, and Satin Slippers by Violette Verdy, a former dancer.
Posted by Kristin at 10:12 PM