Thoughts on Princess and the Pea

It intrigues me to think of certain fairy tales that are well-loved in almost every time and culture, as opposed to other tales that fly under the radar, yet manage to survive in common knowledge. I'm almost awed by how well-loved Cinderella has been for centuries and among peoples from all over the globe. On the other hand, I've been thinking about Princess and the Pea lately, and it struck me that in the books and blogs I read I've come across very little on that tale. There are a few modern versions of it, but it doesn't hold a candle to some of the more standard fairy tales. 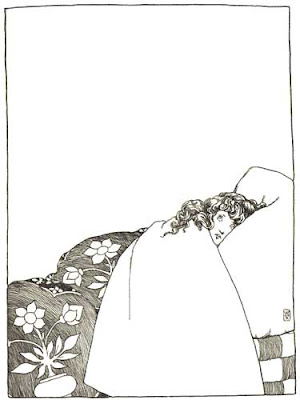 Why the lack of love? The most obvious reason seems to be that no one can relate to the heroine's task of being unable to sleep because of the presence of a pea underneath a sea of mattresses. Like many fairy tales, the specifics have been exaggerated and can in this case be found humorous, but the main character's only virtue is her inability to live a life other than that of utmost luxury. While we might pine for that kind of wealth ourselves, to have that as a moral standard makes me a bit indignant.
However, similar tales that came both before and after Hans Christian Andersen's famous version have the heroine successfully pass a test like this not because of actual royalty or sensitivity, but because of cunning or outside help. This kind of story makes the heroine more appealing while tending to villainize the queen who makes the ridiculous standards (in Andersen's version, the Prince himself desires to wed only a real princess). 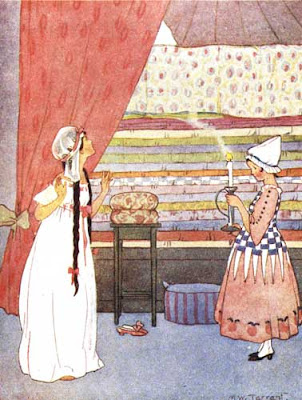 But this take on the fairy tale hasn't skyrocketed its popularity. Even though, when you think about it, the princess' sensitivity to peas under a mattress is really just as unattainable as Cinderella's conveniently being far and away the most gorgeous woman in the whole kingdom and thus attracting the attention of the Prince. Yet most girls dream more of being a head-turning beauty than sleepless nights due to the slightest of different sleeping arrangements. Some similar tales, according to wikipedia, involve characters that really just have super sensitive skin-a hair that leaves a red mark and a jasmine petal causing a woman's foot to be bandaged. Obviously we're supposed to interpret this as exaggeration, symbolically representative of well-breeding and an appreciation of the finer things in life-but literally this sounds like an awful disease. If one hair leaves a red mark, what does your actual head of hair do to your neck and shoulders? Imagine what raindrops would do, or heaven forbid, an actual event that would cause an injury to a normal person?

But I think another reason this poor princess has never been really popular is that she's probably the only fairy tale heroine who never really suffers. Well, okay, she turns black and blue because of the peas, but nobody really feels that sorry for her for that. Other heroines are abused, many of them have attempts taken on their lives, they may be abandoned, lose a loved one, or go through other traumatic experiences. Many other princesses have to go through strange tests before their ultimate unveiling as the true princess-silence and nettle shirt making, journeys to the four winds and sun and moon, cooking things and leaving tokens in the food, etc.-but those princesses already have our sympathy because of all the evils they've suffered. 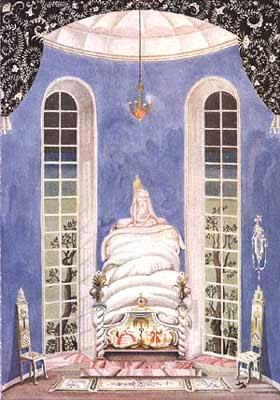 Talk about unpopularity-I had no idea this fairy tale was originally from Hans Christian Andersen until I looked it up, because I have two collections of Andersen tales, and neither includes this one-despite the inclusion of other much lesser known tales such as "What the Old Man Does is Always Right" and "The Galoshes of Fortune." Yet, even those who don't claim to be fairy tale fans know the plot to this tale. I do have a bit of respect for any fairy tale that manages to stay alive despite its lack of Disneyfication-in this case, the only major media from this tale is the musical Once Upon a Mattress.