Helen Pilinovsky has a great online article for learning more about Baba Yaga. She is an intimidating figure, living in a mobile hut which stands on chicken legs, flying about on a mortar and paddling through the air with a pestle, and lives in a forest which is the land of the living dead. Sometimes Baba Yaga acts as helper, aiding a traveler in a quest, but she can also be cruel and cannibalistic. 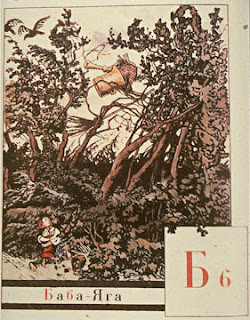 Baba Yaga is found in multiple tales all over Russia, which makes her unlike any of our familiar characters in Western lore, for none of our characters transcend the barrier into other stories-in fact it's only recently that it's been popular to combine fairy tales into one world, such as in the musical "Into the Woods" or ABC's "Once Upon a Time". This reoccuring aspect of the character of Baba Yaga makes her all the more formidable. In Pilinovsky's words, "Unlike other villains, who may be defeated once, never to be heard from again, Baba Yaga is not permanently conquerable, for Baba Yaga is far more than just another witch." This is especially interesting in light of the stereotype that fairy tales are merely idealistic and oversimplified stories of good defeating evil and not to be taken seriously. Pilinovsky describes tales in which Baba Yaga appears to die, but returns unchanged, "indicating one of the fundamental tenets of the Russian fairy tale: that while humanity may enact changes for the better, there will always be forces working against them."

Pilinovsky identified three main roles that Baba Yaga plays: Cannibal, helper, and figure of malevolence. Stories of Baba Yaga as cannibal are often relatives of the tale of Hansel and Gretel, where the protagonist tricks Baba Yaga herself into the oven.

As helper, Baba Yaga is not always necessarily willing-but often otherwordly creatures are restrained by sets of rules and must keep their side of a bargain made. In the tale Maria Morevna, Ivan is helped by Baba Yaga, although she tries to trick the hero into failing his duty-but she is outwitted. In Gene Wolfe's retelling of the tale, Baba Yaga is not a witch, but her power is represented by her status as a Duchess, and her ability to penetrate the human heart. Is that not one of the most unsettling aspects of witches and evil characters-knowing just how to tempt the main character to stray from their purpose? 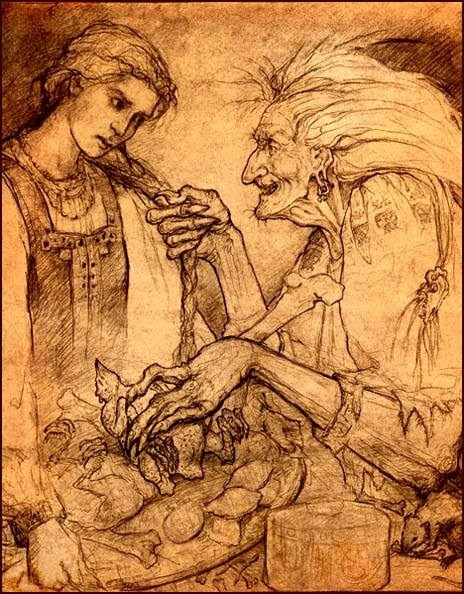 Image by Forest Rogers, from here

Orson Scott Card's novel Enchantment also portrays Baba Yaga as Russian nobility. Pilinovsky sees this trend as a societal turn from attributing power to supernatural forces, to more natural sources. It's not an entirel unlikely jump to make, for nobility are not only powerful but throughout history have been known to abuse their power. Card's Baba Yaga is a manipulator who started as an innocent girl, but was driven to cruelty after being married to an abusive husband. She turns to cruelty and torture, and in the end is defeated by the heroes because of the heroine's having conceived a baby-though Baba Yaga has born children, she is incapable of loving them. Thus, she is defeated by love, although not dead, and like in folklore, Card hints that though she exits this story, she is still out there and may become a character in another story.
Posted by Kristin at 1:42 PM