Sleeping Beauty through the eyes of Bruno Bettelheim 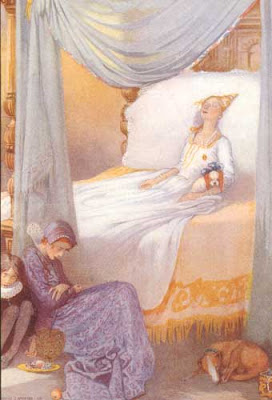 One more to round out my little mini-series...
In "The Uses of Enchantment: the Meaning and Importance of Fairy Tales," Bruno Bettelheim explains his psychoanalytical understanding of fairy tales. I remember disagreeing with a lot that he said the first time I read through this book, but looking back at the Sleeping Beauty chapter, I was surprised by how encouraging I found some parts to be.
Bettelheim sees the sleep of both Sleeping Beauty and Snow White as the physical lethargy that literally occurs at puberty, and also the "long, quiet concentration on oneself that is also needed" which symbolically happens at puberty. Both activity and inactivity are necessary at times of major life change, and the tales assure listeners that their listless stages will not last forever. Modern interpretations of fairy tales treat the idea of passivity with contempt (especially female passivity), but I totally agree that there are times for either extreme in everyone's life, as well as taking into account different personalities prone to either one; all action or all passivity is bad, but it's not bad to lean naturally towards one or the other.
Bettelheim also claims that the passivity is not limited to girls, though the obvious examples of Snow White and Sleeping Beauty would appear to indicate so; "even when a girl is depicted as turning inward in her struggle to become herself, and a boy as aggressively dealing with the external world, these two together symbolize the two ways in which one has to gain selfhood...the male and female heroes are again projections onto two different figures of two separated aspects of one and the same process which everybody has to undergo in growing up...children know that, whatever the sex of the hero, the story pertains to their own problems." I really like the idea of this, but don't know how true this actually is...(he does reference Cupid and Psyche, though, and how in that the female falls in love when viewing the male in repose, switching the stereotype). Is it possible that our very gender-focused interpretations of fairy tales hinder readers from applying both genders to themselves? 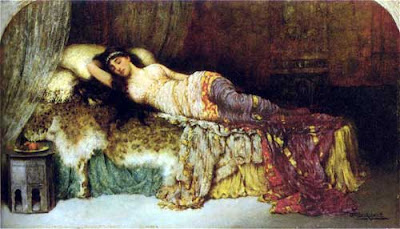 Then Bettelheim discusses the major versions of Sleeping Beauty-Basile, Perrault, and the Brothers Grimm, with very interesting discussion and commentary on each (you can see basic facts about each one at my most popular post to date, Sleeping Beauty-A Very Brief History). In Basile's tale, the father king is replaced with a lover king, which Bettelheim sees as being the natural way that a girl replaces attraction to her father with attraction to a lover. Other people might see that as being the historical fact that females were subservient to their fathers, then handed off to husbands, to which they were subservient as well. Bettelheim goes into more detail about the oedipal influences he sees in the tale, which I won't list here.
He goes on to Perrault. The Prince in Perrault's tale is more separated from the father King, but is not faultless. He knowingly leaves his wife and children in the protection of his ogress mother. Bettelheim explains this: "he [Perrault] did not take his fairy stories seriously and was most intent on the cute of moralistic verse ending he appended to each."
Also in Perrault, the mother figure becomes the fairies, who are separated into good and evil aspects. Bettelheim sees the fact that the evil fairy is not punished as a weakness in the plot. 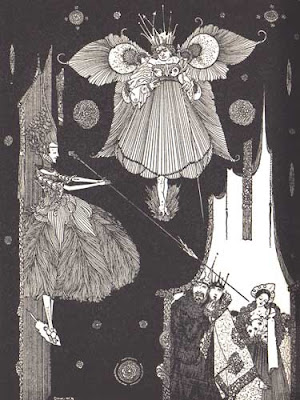 "The central theme of all versions of 'The Sleeping Beauty' is that, despite all attempts on the part of parents to prevent their child's sexual awakening, it will take place nonetheless." Again, it's a nice thing to take away from the tale, but who actually comes up with this on their own? I wouldn't call it "the central theme of all versions" of the tale. Bettelheim lists several reasons that the pricking of the finger (shedding of blood, the age of 15) is really menstruation. He also lists several things about the scene that symbolize sex (circular staircase, small door, lock and key, door springs open, small room, "what kind of thing is this that jumps about so funnily?") but still claims that the main associations aroused are menstration itself. In fact, he indicates the real theme is waiting-the fact that the parents have to wait so long for a child, and the wall of thorns that arises as protection until the time is right-suitors who come to early perish in the thorns. "This is a warning to child and parents that sexual arousal before midn and body are ready for it is very destructive." ...so what about all those symbols of sex that happened before the enchanted sleep?
Bettelheim makes another interesting point about the menstration theory-it's only the king who tries to prevent this curse from happening, while the queen seems untroubled in each version about the fairy's curse. I had never noticed this before-I guess I assumed the king's actions represented the concern of both parents. Bettelheim sees the queen as "knowing better than trying to prevent it." Interesting thought...
But no worries about younger children-though they won't understand the full meaning of the tale as in the onset of puberty, they will still understand it as "awakening to his selfhood." 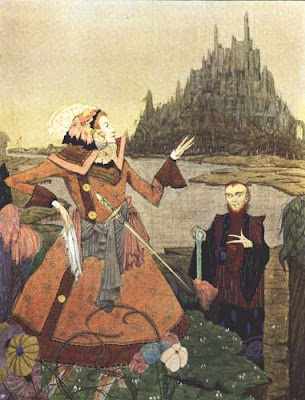 Bettelheim also sees the sleep of the adolescent as narcissim-shutting oneself off from the world, teenagers dream of everlasting youth and perfection. The kiss that awakens the princess is connecting to other people-"only relating positively to the other 'awakens' us from the danger of sleeping away our life." Again...I agree with the general concept, but don't necessarily see it as the obvious meaning of the tale.
The tramatic events of the heroine's life have happy consequences-therefore "the story implants the idea that such events must be taken very seriously, but that one need not be afraid of them. The 'curse' is a blessing in disguise."
Bettelheim makes another interesting comment before he closes the chapter-in the earliest known versions of the tale, Perceforest and Basile, the awakening happens not from a kiss, but from a baby sucking the flax out of her finger. Females, he claims, don't acheive complete self-sulfillment until they have given birth and nurture their baby. A lot of women would be offended by this. Personally, I have no desire for my own children at this point in my life and I feel incredibly self-fulfilled, but I'm not offended; undeniably many women do feel the desire to have children, and that would be an experience unlike any other. It's just interesting that Bettelheim draws such grand conclusions from such drastically different variations of the tale. I don't think he would claim that this is representative of a cultural shift from valuing childbearing to valuing interconnectedness...
Images: 1. Honor C. Appleton 2. William A. Breakspeare 3. and 4. Harry Clarke
Posted by Kristin at 7:16 PM