Tales from the Igloo

I love fairy tales not only for the story, but for the way they give you a glimpse into a totally different way of living. The book "Tales from the Igloo" appealed to me recently because of a heat wave we were having at the time in Chicago-and this is my first summer living in an apartment with no air conditioning.

The tale "Taligvak" is about a man with magical powers who is shunned by his community, until a harsh winter brings scarcity and they realize they need his help to get food. The following paragraph not only sheds light into what it might have been like to live as an Inuit, but provides the imagination with a pleasant break from the heat:

"...He was very poor, lacking nearly all necessities. No one wanted to give him a daughter for a wife and so Taligvak had no one to sew warm clothing for him. He did own a knife and with that he was able to build a snow house. But it was so small that he could not lie down inside it and instead had to remain in a sitting position even when trying to sleep. Moreover, as there was no stone lamp in his igloo, Taligvak suffered from the cold. When his mittens became frozen with frost he had to put them under his clothes, next to his skin, and as he slept the heat from his body would dry them." 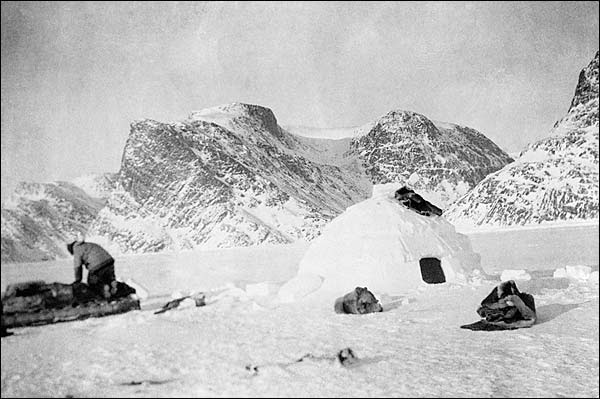