On Beauty and the Beast... 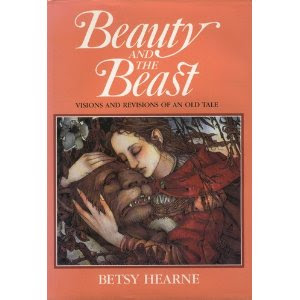 Betsey Hearne: "Beauty's is the journey to the underworld, to existence beneath the surface appearances. Along the way, she faces the danger all heroes encounter, a monster representing-perhaps created by-her own fear. Beauty's triumph is a strength of perception that leads to reconciliation with self, mate, family, and society. Her good looks become irrelevant, an ironic context for her previous failure to see. As her inner vision clears, she refocuses the old adage: beauty is in the eye of the beholder. Beauty is not what one sees but how one looks at it, not passively, artificially, but actively, probingly. Her vision becomes a "burning gaze." Beauty, like the Beast, is an inner force. In dissipating her fears, she dissipates the fearsome aspects of the Beast.

..."The Beast is neither archenemy nor traditional hero. He is a much more poignant and affecting figure than the prince who succeeds him because he is in conflict with himself, while the Prince is perfect. The Beast combines a forceful nature with a gently naivete, brute strength with painful yearning. The Beast wants a relationship with Beauty; he will lure her but will not force her into it. Instead of trying to eat Beauty, he feeds her. He is powerful, yet vulnerably at the mercy of his unrequited passion. He is terrifying and also magnetic."

From Beauty and the Beast: Visions and Revisions of an Old Tale. I can literally open this book up to any page and know I'll find something beautifully written and thought provoking...however, one little comment-why does Beauty always get accused of initally judging the Beast by appearances? I think she's actually more than decent to him initially, and if she shows fear or loathing it probably has something to do with the fact that he threatened to kill her father for no reason. Even if not, did we expect her to accept a marriage proposal on the first night of their acquaintance?

On the subject of the fairy tale and judging by appearances-remember the movie Beastly? I gave it a not so favorable review...found this interesting tidbit via The Grimm Tea Party (couldn't resist looking into a blog that referenced both the Grimms and tea in the title):
"And what about the beauty character in the book? “...our beauty is a shy, sweet, book smart, average looking girl named Lindy. Lindy's appearance is the only thing that separates her from “Beauties” of past. With her red hair, freckles, green eyes and crooked teeth, she would have never been the Beast's ideal in his past life.”

Wait a moment, that doesn’t quiet sound like the character Vanessa Hudgens is portraying in the film... Oh dear. Melina ends her review on this note, “There is a movie adaptation of Beastly coming out and since Vanessa Hudgens is playing Lindy, I guess the moral of the story was lost in production.”"

Interesting...not really surprising for Hollywood, but I am more interested in the book itself now. That's a theme that more recent versions of the story emphasize-the fact that, at the end when the Beast transforms, in terms of status and beauty, they really have swapped roles. Jane Eyre has been likened to a Beauty and the Beast story, and it sort of happens in reverse order in that book, but Robin McKinley's Beauty as well as the original Villeneuve more or less assume that once the Beast is a handsome prince he won't love her anymore, a mere farmer's daughter. So really both of them love for the right reasons in the end.
Posted by Kristin at 1:02 PM