The problems with trying to find morals in fairy tales

In Maria Tatar's Off With Their Heads!: Fairy Tales and the Culture of Childhood, she has a very interesting section on Beauties and Beasts, analyzing different types of Animal Bridegroom tales. Often, modern interpretations of tales such as Cupid and Psyche and Beauty and the Beast criticize the tales for what seem to be misogynist messages: "Never once do these stories show a heroine making a move in the direction of autonomy-the tales ceaselessly turn on the question of retargeting the object of the woman's devotion [from her father to her lover]." Tatar points out that women are expected to love because of duty and not passions, yet men rarely have the same standards applied to them.

Yet I have a very strong connection to the story of Beauty and the Beast and love the fact that Beauty learns to love someone despite how he looks-not because she's a woman, but because she's human. Many critics of the woman's expectation to accept whatever she's given are also under the impression that all Beasts are evil as well as ugly, a trend popularized by Disney, but this was never the case before (with the Marianna and Mercer Mayer picture book being the only exeption as far as I'm aware). As a single tale I think it's a beautiful, powerful, and challenging story, and yet if you look at the pattern of the tales told through history, you do notice disturbing trends. Cupid and Psyche especially is very condeming of feminine curiosity-Psyche is severely punished for looking upon Cupid, but who can blame a woman for wanting to look at her husband? Tatar points out that Psyche's act reveals she wants enlightenment-knowledge of her husband that goes beyond carnal (he's been visiting her every night and performing his husbandly duties under the mask of darkness). You would think this would be encouraged, but it proves to set off the chain of events that make Psyche miserable for years as she has to earn back her husband-another source of grief for modern people who loathe the implication that a woman's life should revolve around the man. I'm still wrestling with the concept of how much you can condemn one tale for fitting into a pattern. Literary collections of tales, like Apuleius' "The Golden Asse", from which Cupid and Psyche comes, or the Grimms, have a direct source you can point to who had their own agenda. But folklore itself-those fairy tales that are supposedly handed down from generation to generation by word of mouth-have no one responsible for their messages and meanings other than collective humanity. It's just kind of sad that your appreciation of a tale can be diminished by knowing that it can be offensive, simply because it suggests things when studied alongside other similar tales.


But Tatar concludes with some very interesting observations that are important to keep in mind when studying fairy tales-you can't take fairy tales too seriously because even within one tale they will contradict themselves. Tatar says, "The many variants of 'The Search for the Lost Husband' remind us of the strength of children's fairy tales as moral magnets, picking up bits and pieces, if never entire blocks, of a value system. But since fairy tales seem to resist wholesale assimilation of a moral outlook or ethical orientation, they tend to offer mixed signals about the way to get ahead. One tale may impart a critique of dishonesty at the same time that it shows a boy defeating his enemies by cheating them. While it is tempting to look for a certain consistency in a tale's moral code (particularly since so many fairy tales have been pressed into service to provide behavioral models), it is rarely possible to find a story that does not encode competing moral claims."


Tatar uses the Grimms' The Frog King as an example. The heroine had to be forced to allow the frog to share her plate and bed even though she had given him her word, violently throws him against a wall, and ends up marrying the handsome Prince he becomes. Tatar's words: she is "selfish, greedy, ungrateful, and cruel, and in the end she does as well for herself as all the modest, obedient, magnanimous, and compassionate Beauties of 'The Search for the Lost Husband.'"' She contrasts this with a similar tale from England where the girl does obey each of the frog's requests, as her stepmother forces her to. The frog even asks that she chop off his head, and after hesitating she still obeys but still ends up with the same result. Tatar says that the tale could be meant to be humorous, as if obeying the commands of a villain would lead to a happy ending. In many fairy tales, whether you obey or violate a command, you get the same results. 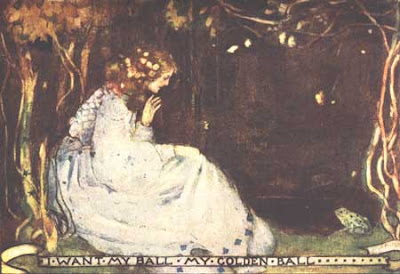 And remember that the fairy tales versions we are familiar with, especially from the Victorian period, were specifically written to be moral guidelines for children, therefore inserting messages in where they weren't before and sometimes contradict the actual facts of the story. But these messages we grew up with become embedded in the meaning of the tales in our minds and it's hard to see them as meaning anything different-but fairy tales can be read multiple ways. Though Tatar concludes that though Cupid and Psyche does have an unfortunate message of rewarding female self-sacrifice while condemning attempts at enlightenment, "it also celebrates the revelatory power of curiosity, the way in which the desire for knowledge of the beloved can deepen passion to turn it into love."
Posted by Kristin at 9:40 PM