If there's anything we've learned from the rediscovery of the Schonwerth tales, it's that gender stereotypes often associated with fairy tales are actually not true of folklore in general, but mainly the common fairy tale collections (which, incidentally, were all by men-Perrault, Grimms, Anderson, Lang, Disney, etc. But even then, their collections sometimes contain lesser known stories with flipped gender roles as well, which for some reason haven't caught on in popular imagination, so we can't put all the blame on the above men). This isn't limited to just Schonwerth either, for there are many examples of heroic females and victimized males in tales all around the world, which tend to get overshadowed by the well-known versions.
A good example of this is Kate Crackernuts, an English version of Twelve Dancing Princesses, which features a prince on his deathbed who goes to an underground kingdom to dance every night, and a courageous young woman named Kate who rescues not only him but her sister in the process. Click through to read the full Joseph Jacobs text, but here's an exerpt: 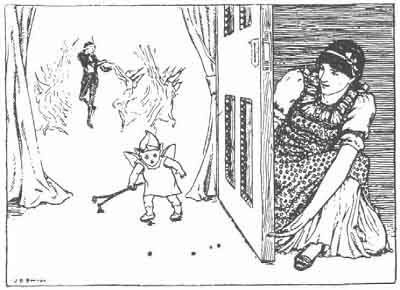 "They went in and found it was a king's castle, who had two sons, and one of them was sickening away to death and no one could find out what ailed him. And the curious thing was that whoever watched him at night was never seen any more. So the king had offered a peck of silver to anyone who would stop up with him. Now Katie was a very brave girl, so she offered to sit up with him.

Till midnight all goes well. As twelve o clock rings, however, the sick prince rises, dresses himself, and slips downstairs. Kate followed, but he didn't seem to notice her. The prince went to the stable, saddled his horse, called his hound, jumped into the saddle, and Kate leapt lightly up behind him. Away rode the prince and Kate through the greenwood, Kate, as they pass, plucking nuts from the trees and filling her apron with them. They rode on and on till they came to a green hill. The prince here drew bridle and spoke, "Open, open, green hill, and let the young prince in with his horse and his hound," and Kate added, "and his lady him behind."

Immediately the green hill opened and they passed in. The prince entered a magnificent hall, brightly lighted up, and many beautiful fairies surrounded the prince and led him off to the dance. Meanwhile, Kate, without being noticed, hid herself behind the door. There she sees the prince dancing, and dancing, and dancing, till he could dance no longer and fell upon a couch. Then the fairies would fan him till he could rise again and go on dancing."
Image from wikipedia, but no artist credited
Posted by Kristin at 3:18 PM