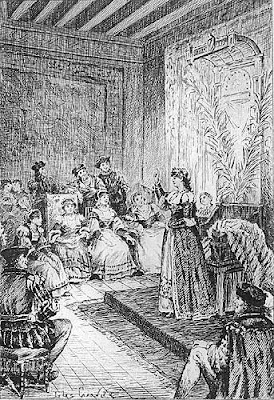 In the Pig King, a good Queen was resting one day when three fairies passed by and thought how they could protect her and put a spell upon her. The first granted her that no man should harm her, and that she should have a son with no equal in the world for beauty. The second said that no one could offend her, and her future son would have every virtue under the sun. The third decreed that the Queen would be the wisest among women, and that her son should be born with the skin and habits of a pig until he had three times taken a woman to wife.

The Queen did give birth to a son with the form of a pig. His parents were horrified and even considered killing him, but out of parental love they decided to raise him as their child. The prince learned to talk like a man, but would go out and wallow in the mud, and come back and nuzzle his parents, getting them all dirty-which they bore out of love for him. 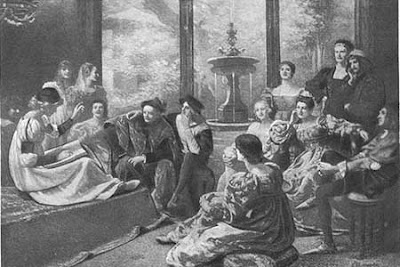 One day the pig came and demanded that he take a wife, for he saw a woman that pleased him. His parents doubted that anyone would take the pig prince as a husband, but he was insistent, and the King and Queen approached the mother of the girl in question, offering her oldest daughter the chance to inherit the kingdom if she married their son. The daughter initially refused, but her mother urged her to consent, so she gave in. Eventually she was brought in to the pig in finery, and he was very pleased to see her so lovely, and jumped around, nuzzling and showing her signs of affection, getting mud all over his betrothed. She was disgusted by this display and shoved him away, which offended him. The bride determined she would kill her betrothed that night, but the pig prince overheard and killed her with his hoofs before she had the chance to kill him.

The queen was dismayed that her new daughter in law had been killed by her son, but he said he was only giving her what she would have given to him. Now he wanted the second daughter of the same woman. The queen wouldn't at first listen to him, but the pig "threatened to ruin everything in the place if he could not have her as a wife." The Queen approached the poor mother again, but the same thing happened to the second daughter as the first.

The pig now demanded the third, and most beautiful daughter, of the poor woman. The Queen was very sorry, for she believed the same fate would befall her as that of her sisters, but the youngest, Meldina, accepted the marriage proposal graciously and humbly. When the pig approached her, making her royal clothes all dirty, she did not push him off, but accepted his affections and even returned them. The Queen was overjoyed when, in the morning, she was not dead. 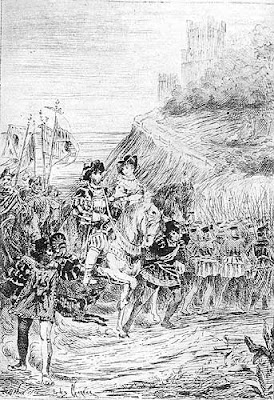 After a while, when the pig believed he had earned her trust, he revealed to her his secret: he took off his pig skin to reveal a handsome man underneath, and went to bed with his wife in his true form, which overjoyed Meldina. She kept his secret for a while, but eventually the burden was too great and she told his mother, who did not at first believe her. So the King and Queen went to the prince's chamber that night, found the pig skin on the floor, and destroyed it. They were delighted to have such a handsome man for their son, and Meldina's child had a handsome human form. The young king began his reign and lived long and happily with his wife and child.

So it should probably go without saying that many aspects of this tale are very disturbing. Could the prince really have all possible virtues like the fairy gifted him if he had to threaten people in order to get wives? How could he expect his wives to love him as he was if he obviously was turned on by their looks, the very thing they were supposed to forgive him for? Why would you ever ever ever give a pig your daughter to marry after he KILLED THEIR SISTERS? Why is the implied message that virtue in a woman is to be willing to be defiled by allowing animals to make them dirty and having sex with them?

But before you get too worked up, although we tend to try and find significant meaning in old fairy tales, in reality much of the purpose was just to entertain and not impart deep life messages. Sometimes something can be funny simply because it's unexpectedly shocking.

I actually think that the image of the parents lovingly raising their pig child is touching-it reminds me of parents taking care of a sick child, cleaning up their vomit and other messes, tenderly patient and caring. Love does require sacrifice, but parental love should be different than romantic love. Romantic love requires sacrifices from both parties, and in this story the pig prince sacrifices nothing while requiring an awful lot from his wives, which is really what most bothers me about this story.

But very interesting is the end of the tale, when Meldina reveals his secret. Unlike Psyche from Cupid and Psyche or the wife from Perrault's version of Bluebeard, this wife breaks her vow of silence yet is not punished for it-in fact, her revealing of the secret is what brings about the total happy ending. But again, I'd caution against trying to find too much significance from anything in this tale.
Images by Jules Garnier and E. R. Huges for Straparola's Facetious Nights
Posted by Kristin at 12:17 PM