An Irish tale, in honor of St. Patrick's Day-


A good, honest couple named Mick and Judy lived with their four boys. The younger three were boys to make their parents proud, but the oldest was miserable and ugly, with dirty matted hair and a greenish yellow face, a mouth full of sharp teeth ever since he was a year old, and who was always screaming or yelping.


The neighbors all suspected that he was a changeling, for every time they would gather around the fire and talk about religion and good things, the child would holler "as if the divil was in him in right airnest." The neighbors advised her to burn him with hot tongs, or throw him out on the dunghill, but Judy was too loving to do any of those things to her child. They advised she get a priest to see him, but she never got around to having the priest come. The child continued to play pranks, until one day Tim Carrol, the blind piper, came. 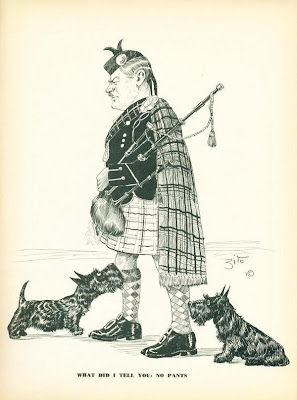 During Tim's visit, he brought out his pipes and began to play, and the child leapt out of his bed and began to dance with glee. The boy wanted to play the pipes himself, and Tim consented to let him play-and the child who had never played pipes before in his life played a tune as well as anyone.
The family was shocked. Tim claimed that the boy was a leprechaun, and offered to teach him, which thrilled the boy's parents. His father Mick went out and bought him a set of pipes, which delighted the boy. He immediately started playing, and soon news of his talent spread, and people came from all around to hear him play. Everyone who heard him felt the urge to dance, some said the furniture was inclined to move when the boy played his pipes. 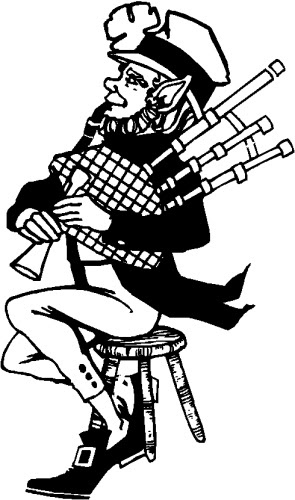 Besides the Irish tunes the boy played, he also had his own tune he made up, and when he played it, people felt compelled to dance, yet they weren't in control. The child played many pranks on people, causing his brothers to burn themselves or break themselves on furniture, making the animals wild, upsetting milk jugs and even killing neighbors' animals or causing barn roofs to fall in.

Since the boys' parents wouldn't hear of anyone hurting their child, their neighbors asked them to leave on account of their child. As the cart was moving their family over a bridge, the piper sat up and began to wail. His mother tried to comfort him, saying their was nothing to be afraid of, and eventually the frustrated father got out his whip and cracked it at the boy. The boy jumped, took his pipes, "an' lept clane ovir the battlemints o' the bridge down into the wather."

His family was horrified and went to look for him, and saw him sitting on a wave, playing the pipes as if nothing had happened. They ran after the boy but he disappeared.
"No one ivir led eyes an him sence; but the gineral belief is, that he wint home wid the pipes to his own relations-the good people-to make music fur thim."