"On Christmas Day, a woman went home through the forest from the town of Eslarn bearing a back carrier. She noticed a pile of moss on the snow, stirred around in it and found a big bumblebee nest. She placed it into her back carrier to take it home to her children; then a tiny little man clothed in green approached, and asked her what she was doing here and asked to be shown the nest in her basket. Immediately, he began to take everything out; on the stroke of twelve he disappeared. Thereupon the woman became scared and hastened home. 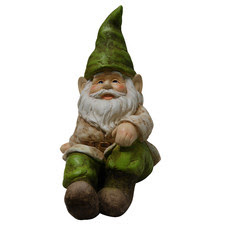 In the basket she found a brand new silver coin. The Dwarf had left behind one bumblebee when he was surprised by the striking of the clock."

According to the notes provided by M. Charlotte Wolf, the Bavarians believed that long forgotten precious metals would end up in the ground over time. "Such a treasure sinks down nine fathoms deep and then rises every seven years one foot toward the surface. Arrived at the surface, it gives testimony of its whereabouts with a blue little flame that hovers above the place where it is to be found."

Also note the importance of the clock striking twelve, which is significant not only in Cinderella but in Christmas lore, as Santa is often thought to visit homes right at midnight (although in this story it appears to be twelve noon).
Posted by Kristin at 9:36 AM