Continuing in my tradition of sharing an Irish tale for St. Patrick's Day! 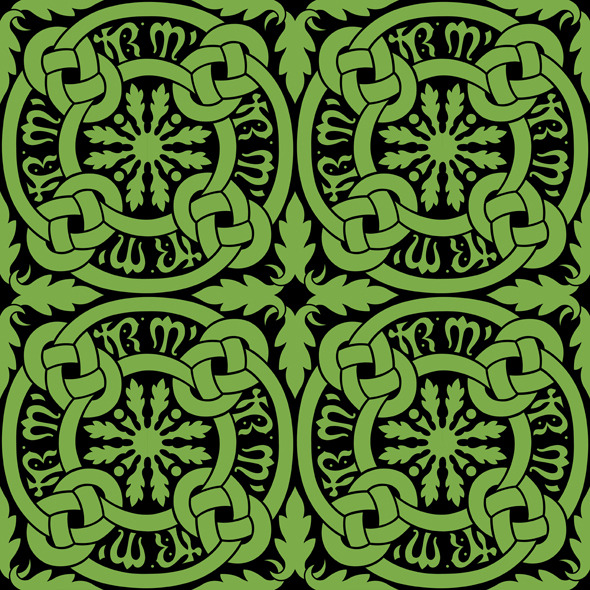 A King had three daughters. One day while he was away, the eldest put on a cloak of darkness and wished for the most beautiful man under the sun as a husband, and a beautiful man came and took her away.

When the king came home he was furious his youngest daughter had wished for a white dog and gone off with him.

The eldest daughter's husband asked her if she would like him to stay in his current form at night, or during the day. She asked for his human form in the daytime, and he was a seal at night. The same thing happened to the next sister.

The youngest wife asked for her husband to remain a white dog during the day, and at night he became a handsome man. After a time she bore a son, and her husband warned her, if anything happened to the child, she must not shed a tear. While her husband was gone, a great crow came and carried the week old baby away, and she did not shed a tear.

The same thing happened after she bore a second son. A little while later, she gave birth to a daughter. Despite the warning, when the crow carried her away, the wife shed one tear, and put it in her handkerchief. When her husband came home and realized she had shed a tear, he was very angry.

Some time later, the father invited his three daughters to stay with him. The white dog was in dread that he would not be allowed to stay in the palace, but his wife told him, "There is no danger to you, for wherever I am, you'll be, and wherever you go, I'll follow and take care of you."

Although the King did not want the dog in his castle, his youngest daughter did not listen to him, and insisted on staying with the white dog all evening. Later, when everyone was in their rooms, the Queen and the cook stole into her daughter's rooms, and was surprised to see her eldest daughters with seals, and her youngest with a handsome man. The Queen also found the white dog skin, and threw it in the fire.

The skin gave a crack that woke everyone in the castle, and everyone for miles around. The youngest daughter's husband was angry, and revealed that if he had spent three nights with his wife under her father's roof, he could have resumed his human form permanently; but if his skin was destroyed, he was forced to leave. But his wife followed him, even though he ran all night and the next day; she would not leave him.

On their journey, they encountered three houses. In the first lived a little boy who called her "mother", and the woman of the house gave her a pair of scissors that would cut rags and turn them into new gold clothes. In the second house the woman met another little boy who called her "mother," and was given a magical comb that would heal sores on people's heads and give them a head full of beautiful golden hair. In the third, she met a little girl with one eye. The mother had kept the handkerchief in which she had shed a tear, and the tear had turned into an eyeball; the mother took out the eye and fitted it into her daughter's head, and she could see out of it. At this home she was given a whistle which would bring birds to her aid.

Finally, the husband and wife came to a place where he had no power to stay on upper earth, but was forced to become the husband of the Queen of Tir na n-Og (the land of youth), and he disappeared. His wife followed down until she came to the lower land, where she befriended a poor washer woman, and helped her with her chores.

One of the local children came to the wife in rags, and she used the magic scissors to make her beautiful new clothes. News of this traveled to the Queen, who insisted on having the scissors for herself. The true wife traded the scissors for a night with the Queen's husband, where she tried to talk to him, but he slept all night.

Later, she used the comb to heal a little girl with sores all over her head, and when the Queen heard of the girl's beautiful golden hair, she traded the comb for a night with her husband, but the same thing happened.

The wife used the whistle to call the birds to her, and they told her how to kill the Queen: her husband must find her heart in an egg in a duck in a wether (a neutered male sheep-thanks, Sue Bursztynski!) in a holly tree in front of the castle, and destroy the egg, which contained her heart. The true wife wrote her husband a letter, telling him of their history and that the Queen was giving him sleeping potions, and how to kill the Queen. Once the Queen heard about the whistle, the true wife was able to strike the same bargain, but this time her husband was awake; he was able to obtain the egg and smash it, killing the evil Queen. He and his first wife are still living happily together in the Land of Youth. 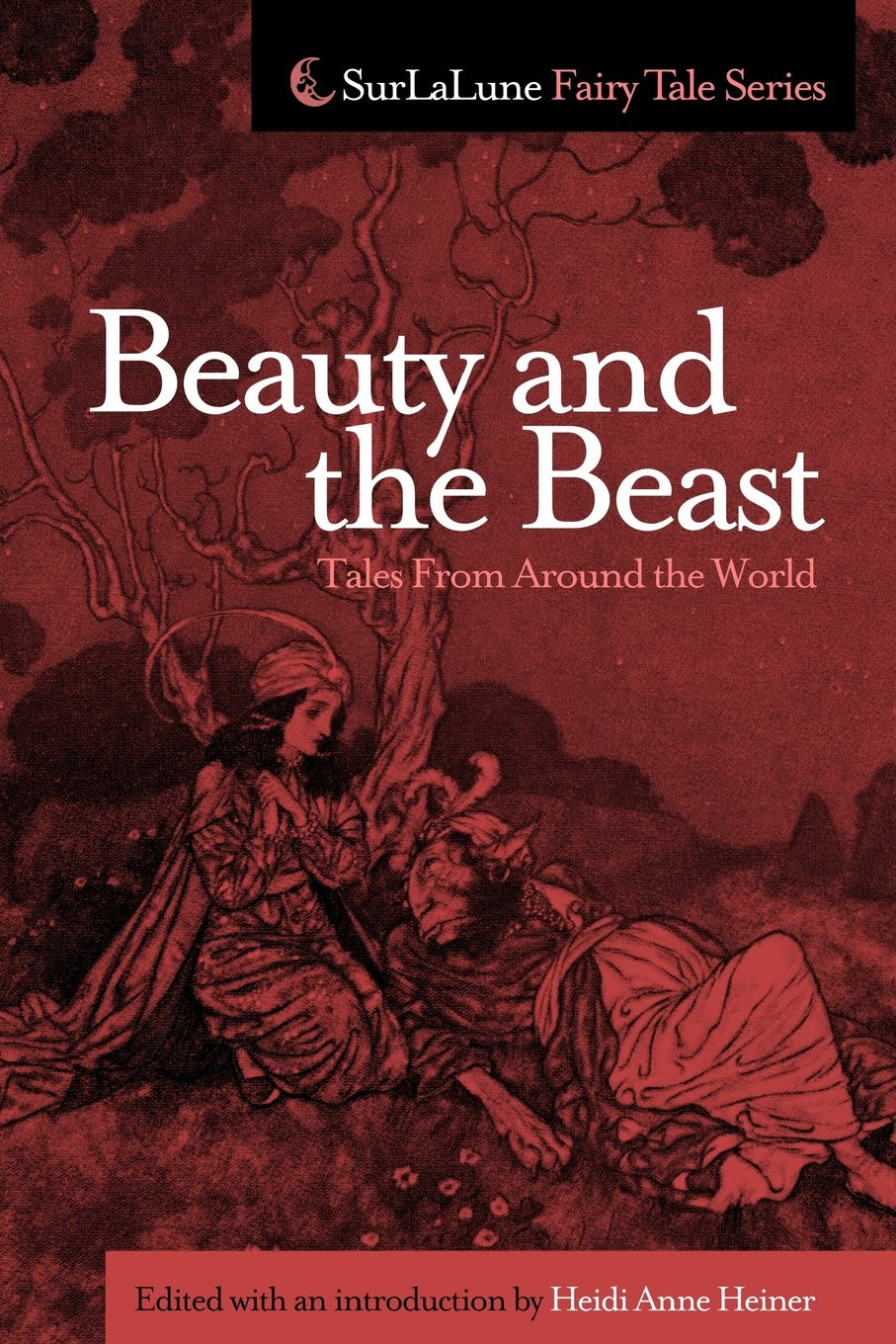 Found in Surlalune's Beauty and the Beast Tales From Around the World
This is such an interesting version of Animal Bridegroom tales! The journey of the wife and the trading trinkets for a night with her husband is similar to many other stories, but so many other features are unique.

I find the idea of the other sisters' husbands also being part time animal bridegrooms fascinating. It's as if the youngest daughter somehow realized that obtaining a husband through wishing on a dark cloak would have some kind of catch. She is also bold enough to defy her father's wishes that her white dog husband not stay in his house, and to follow her husband despite his protests that she return home.

I love how she keeps the eyeball and is able to heal her daughter (in a similar English tale, the daughter simply remains blind in one eye). The stipulation of not crying after her children are taking is very sad-but in tales like these, even though the curses are never explained, it seems that they were meant to be impossible to break (in another similar tale, the wife must remain silent while her husband, a bird, is being attacked and beaten). Yet none of the wives in these tales are condemned for showing motherly affection (or sticking up for their husbands).

I also love how, whereas the husband usually just disappears, this wife chases after him and won't let him out of her sight during the journey! This story is definitely more feminist, even compared to other Animal Bridegroom tales in which the wife is already on a journey and seeking her husband, playing the part of the traditional male rescuer to her helpless cursed husband.

In some versions, the magical objects she is given is only used for bartering purposes; I really like how in this tale she befriends the poor people, works with them, and uses the magic to help others, and indirectly gets an audience with her husband. Also, in other versions, the husband is eventually clued in to the voice in his bedroom by a friend or servant, but in this one, his wife takes the initiative to write him a letter! Makes so much more sense. This heroine is active and clever. It's still a pretty bizarre little tale (what ends up happening to her children, for example?) but a fun one.
Posted by Kristin at 2:38 AM