Guest Post: Lissa Sloan on God, the Devil, and Death Walk Into a Forest: Heavenly Godparents and Other Immortals

I am very pleased to bring Tales of Faerie readers a post by writer Lissa Sloan! She is one of the authors featured in Frozen Fairy Tales, with her story "Death in Winter." 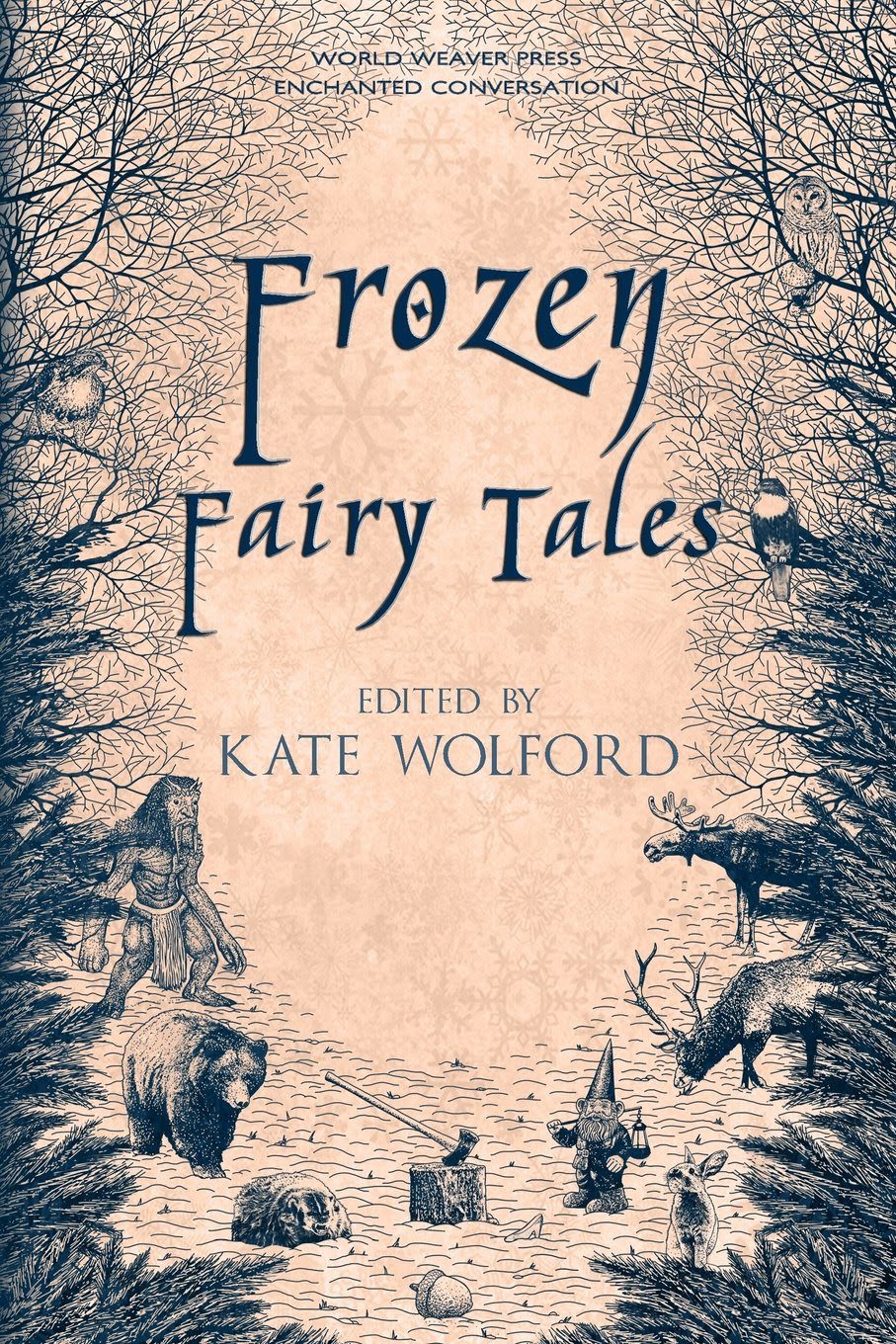 (Also, it may seem like it's a little out of season by this point to still be featuring Frozen Fairy Tales but this guest post somehow got lost in the vast internet, and just recently made a harrowing journey back to my inbox. But as I initially drafted this, it was literally snowing here in Chicago, so depending where you live winter may still be lingering-or on its way, those of you in the Southern Hemisphere!)

Lissa's story involves a young mother's journey following Death in a desperate attempt to save the life of her daughter. It's well written and the protagonist is a strong, admirable character. Some of the stories in the collection have a modern feel to them; "Death in Winter" has a timeless quality to it.  In ways it feels like listening to an old folktale told by a fire, but it has some unique elements to it as well, and keeps you wondering what's going to happen next! So without further ado: Please enjoy Lissa's insights, delving further into the concept of Death and other Immortals as characters in folklore!

God, the Devil, and Death Walk into a Forest: Heavenly Godparents and Other Immortals

When I first began delving into fairy tales and reading more than the most familiar stories, I expected to find fantastical characters like witches, giants, trolls, and fairies. I did not, however, expect to find immortals like God, St. Peter, and the Virgin Mary. And yet, it's not at all uncommon for our hero or heroine to encounter them, like a poor man does in "Godfather Death". Desperately looking for a godfather for his child, he meets God, the Devil, and Death, who each offer to do him this service. The man rejects God, saying that he allows the poor to suffer. He likewise rejects the Devil, because, well, he's the Devil. And he accepts Death because all are equal in his eyes. The child does well with Death as a godfather. At least until, in true fairy tale fashion, he tries to push things a bit too far. Sometimes these Christian figures are in Heaven, doing heavenly sorts of things. For instance, St. Peter is often found guarding the gates, like in "The Tailor in Heaven", in which he erroneously lets an overly curious and judgmental tailor into heaven when God is out for the afternoon. But it is just as likely you will find him or the Lord down on earth, looking for directions, a place to stay, or something to eat. In fact there are many stories featuring Jesus and St. Peter just traveling around, rubbing shoulders with poor folk, rich folk, gamblers, and soldiers. Some of these stories are a bit like parables,with Jesus teaching a moral lesson. But many are silly, featuring Peter as a buffoon, trying to get away with doing less work or getting more than his share. In "How Saint Peter Lost his Hair", Peter hides a pancake under his hat so he doesn't have to share it with Jesus, but the hot pancake burns the hair off his head. Often, Jesus's response is reproving but forgiving, but other times he is as good-humored as a typical fairy tale trickster. In "Stones to Bread", Peter lugs a giant rock along the road, greedily hoping the Lord will turn it into a giant loaf of bread if there is no bread available at their destination. But there is plenty of bread, Peter has toiled all day for nothing, and Jesus has a good laugh at his expense.

When the Virgin Mary appears in fairy tales, sometimes taking a poor girl into her care, she is more dignified. In fact, in "Our Lady's Child", she is quite austere. Her protege is caught in a lie she will not confess to, so Mary punishes her, kicking her out of her heavenly home and taking her voice. When the girl marries a king and has children, Mary appears after each birth, giving the queen a chance to confess, then taking the baby and framing her for its death when she refuses, much like the villainous mother-in-law in "The Six Swans". Only when the queen is about to be put to death and at last confesses does Mary relent.

In "Pearl Tears" from von Schonwerth's The Turnip Princess, however, Mary is much more like a fairy godmother, helping to deliver her goddaughter Maria, and, when things turn ugly with the girl's stepmother, giving her a home in her palace. When Maria transgresses in the same way as "Our Lady's Child" (looking into a forbidden chamber), Mary does banish her, but she continues to keep an eye on her. Maria now cries pearl tears, so is able to make the best of any misfortune, and eventually Mary allows her to return to her palace and take her place caring for the poor and the sick. 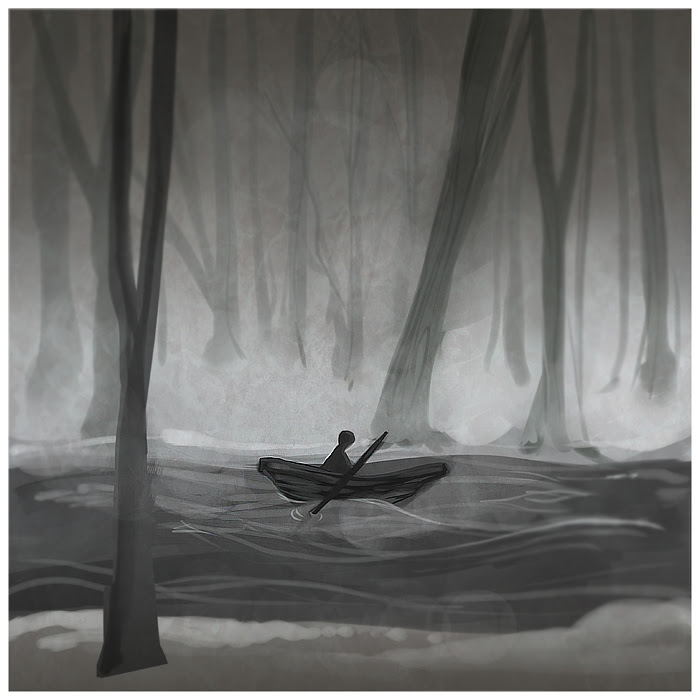 The Ferryman from "The Devil and the Three Golden Hairs," by fresh4u

My favorite immortals are the Devil and Death, perhaps because they're both so unpredictable. Like the other immortals, Death and the Devil are powerful beings, but in many ways, fairly ordinary folks. In "The Devil with the Three Golden Hairs" and "The Devil and His Grandmother", the Devil has a grandmother, who cooks, keeps house for him, scolds him for being bad-tempered, and even removes his lice when he asks her. She also takes pity on our heroes when they ask for her help, even if it means her grandson loses out on his bargain. The devil is fond of bargaining, of course, but many heroes are able to outwit him. In some stories, however, he's just looking for some help around the house, as in "The Devil's Sooty Brother", and he pays up willingly at the end of his servant's tenure, and even cuts his hair before he goes. In "Bearskin" he loses out on the soldier's soul, but is just as happy to gain the man's two jealous sisters-in-law instead. Like the Devil, Death is often a fearsome adversary, and many tricksters are forced to submit to him in the end, as the godson must in "Godfather Death". But Death can also be merciful, as in "Death and the Gooseboy". The world-weary child asks Death to take him along, and, after making sure a rich, greedy man gets his just deserts, Death agrees and takes the boy to his heavenly rest. In "Death's Messengers", he promises a man who has helped him that he will warn the man his death is imminent by sending his messengers on ahead. (Unfortunately, the man does not recognize illness or increasing weakness when they arrive, but Death has kept his promise.) 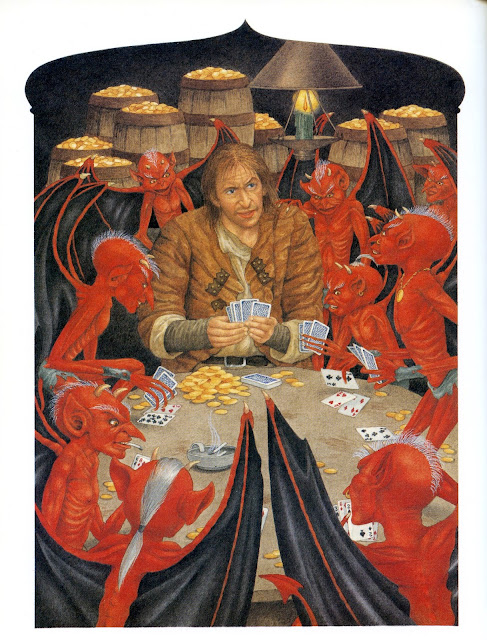 "The Soldier and Death," Darcy May

Like the Devil, Death also finds him or herself tricked by mortals, winding up caught in magic trees, bottles, or in the case of the Russian tale "The Soldier and Death", trapped in a soldier's magic sack for years while no one on earth can die. In this tale, Death, who appears as a little old woman, is quite a pathetic figure by the end of the story.

Thanks, Lissa! For more of her writing, be sure to visit her website! (For more on the devil in fairy tales, check out Adam's recent post at Fairy Tale Fandom on the Grimms' tale "Bearskin," which happens to complement this post perfectly!)
Posted by Kristin at 2:30 PM