Scary Fairy Tales: The Silver Saucer and the Transparent Apple

In an earlier post in this series, Ozfan95 mentioned this Russian tale in the comments, and also pointed out that you could consider "Juniper Tree" a ghost story, as the murdered boy's spirit takes the form of a bird. It got me thinking about all the other well-known fairy tales in which there might be ghosts, even if we don't think of them as ghosts, and the first thing that popped into my head was "Cinderella." With the exception of Perrault's Fairy Godmother, it's almost always the spirit of Cinderella's dead mother who helps her-in the form of a tree, a fish, a doll, etc. 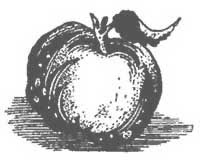 Anyway, the story of "The Silver Saucer and the Transparent Apple" is an interesting combination of a Cinderella tale with "The Singing Bone." It begins with the classic scene in which a father offers to buy gifts for his daughters; the eldest request dresses and jewels, and the youngest has a more unusual request. This youngest daughter is, of course, the most beautiful, and we are told over and over that she is good and she does all of the chores. She is called "Little Stupid" by her sisters (and even her father!)-sometimes we're so used to the name Cinderella we forget that name was also supposed to be an insult, more along the lines of "Dirty Ella."

Little Stupid requested a silver saucer and a transparent apple. No one else understands why, and they attribute the desire to her stupidity, but once she gets the items and spins the apple in the saucer, she is able to see anything she wants to, all over the world, in it. Her sisters become jealous, take Little Stupid into the woods, and kill her with an ax. That spring, a reed is growing in the forest where the dead sister lay, and a shepherd comes by and uses it to make a flute. The flute begins singing all by itself, and tells him the story of how she was murdered. The flute is eventually taken to the girls' father, and he finds his daughter's body, and is able to bring her back to life with holy water from the Tsar. After that follows a more unsatisfactory ending (in my opinion) where she marries the Tsar and forgives her family, although the shepherd who originally found the reed is in love with her and I was rooting for him. In fact, the children who are being told the story felt the same way I did, and the narrator, Old Peter, explains that it was actually good because if he had married Little Stupid, he would have had to live with her whole nasty family. So...that's one way to look at it?

The Grimms' "Singing Bone" is a much shorter tale; a man is murdered by his brothers and his bone tells the story. Only in this one, the ending is more bittersweet, because while the bone allows the murdered man justice and his brothers are punished, he is not brought back to life. He is, however, given a proper burial. This tale somehow seems more satisfying to me; the ending of the other tale seems a bit forced. I normally don't mind too much the versions where Cinderella forgives her sisters (depending on how that part is worded), but at least they don't usually try to kill her! It hardly seems like a happy ending for her to live with her abusive family forever while the poor shepherd who actually rescued her doesn't get the girl. In fact, in none of the other related Singing Bone tales on Ashliman's site does the murdered person come back to life (although it does happen in other tales-see the comments for more discussion!), or are the murderers forgiven (although sometimes the remains don't sing, but bleed-it was widely believed in Medieval Europe that a murdered corpse would bleed in the presence of its murderer.)

Image
Posted by Kristin at 9:59 AM