The Grimms collection has no "Beauty and the Beast" tale per se, but "The Singing, Soaring Lark" is an animal bridegroom tale with clear parallels. It's got a little Cupid and Psyche, a lot of East of the Sun West of the Moon, a little of the Jephtha theme, and replaces the rose with a bird. The whole element of romance and the surprise of learning that the animal bridegroom is really a human is nearly eliminated, which is interesting because those are the elements that most appeal to me. Also, the sisters are not evil, but neither especially good, a rarity in fairy tales of any type.

"There once was a man who set out on a long journey, and before he left he asked his three daughters what he should bring them. The two eldest wished for pearls and diamonds, but the youngest wished for a singing, soaring lark. The father had no trouble finding the diamonds and pearls, but was distressed when he could not find the bird for his favorite daughter. But on his way through the forest, he saw a splendid castle, and on top of a nearby tree was a singing, soaring lark. The man was delighted and called for his servant to climb up thre tree and catch it. 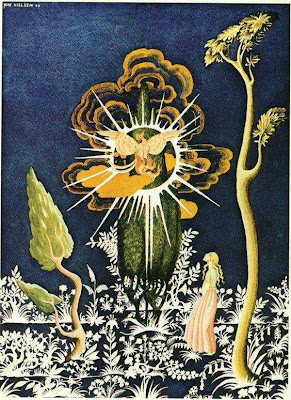 Kay Nielsen (this is actually an illustration for Juniper Tree-pretend it's a lark.)

But as he does, a lion leaps from beneath the tree and roared, threatening to devour anyone who tried to steal his singing, soaring lark. The man apologized and asked for an opportunity to right his wrong, but to be spared his life. The lion allowed him to promise the first thing that greeted him on the way home. The man protested that it might be his favorite daughter who came to greet him, but the lion persuaded him to take the chance and make the bargain.
To the man's dismay, it was his youngest daughter who ran to greet him upon his return, and was overjoyed at the sight of the bird. The father told her the story, and begged her not to return to the lion, but the daughter insisted that she would go an soften the lion.
Now, the lion was enchanted and was only a lion by day, but resumed his true human form at night. The daughter was kindly received and led into the castle on her arrival, and married the man in a magnificent wedding. The couple stayed awake through the night and slept during the day.
One day, the lion-man told his wife that her eldest sister was to be married, and she could go join the festivities. She went, and her family was overjoyed to hear that she was alive.
Some time afterwards, the other sister was to be married. The lion's bride insisted he come along, but he did not wish to, for if a ray from a burning candle were to fall on him, he would become a dove for seven years. But the wife promised to protect him, and they went with their child to her sister's wedding. She had a chamber built strong and thick to keep out rays of light, but there was a small crack that no one noticed. After the wedding, there was a procession with candles that went right past the man's chamber, and he was transformed into a dove. He told his wife, "For seven years I must fly about the world, but at every seventh step that thou takest I will let fall a drop of red blood and a white feather, and these will show thee the way, and if thou followest the trace thou canst release me." His wife followed him, and found the drop of blood and white feather as he had said.

She travelled further and further, never looking about her or resting. Finally the seven years were almost over, and she rejoiced at the thought of being united again, but suddenly the drops of blood and feathers stopped appearing. She looked up, but the dove had disappeared. She climbed up to the sun, and asked him if he had seen a white dove. He had not, but gave her a casket to open in her greatest need. She went to the moon, who gave her an egg to be opened in her greatest need.
The east and west winds had seen nothing, but the south wind saw him at the Red Sea, transformed once again into a lion, and fighting with a dragon, which was really an enchanted Princess. 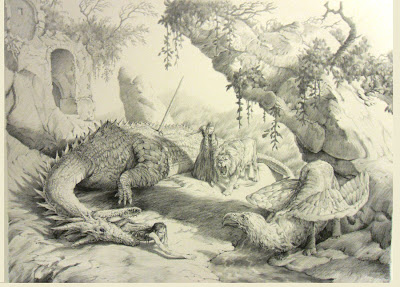 The night wind gave her instructions to break off the eleventh reed she found and strike the dragon with it, and the two animals would turn into their human forms. Then she was to swing her lover and herself onto the back of a griffin she would find. The night wind gave her a nut to drop into the sea, which would grow a tree for the griffin to rest on.
The wife found everything as the winds had told her, but the disenchanted dragon took the prince with her on the back of the griffin. The wife sat down and cried, but stood up and took courage and continued her search. She travelled a long way and came to the castle where the Princess was living with her husband, and she heard they were to be married the next day. The wife opened the casket from the sun, and found in it a dress as brilliant as the sun itself. She put it on, went into the castle, and everyone looked at her with astonishment. The Princess wanted the dress for her wedding gown, but the wife would only give it to her on the condition that she sleep in the chamber where the bridegroom slept. The Princess consented, but instructed the page to give the bridegroom a sleeping drought. So the wife pleaded with her husband all night long, but to no avail.

The poor wife went out to the meadow and wept, but remembered the egg the moon had given her. She opened it, and out came a clucking hen with twelve chickens all of gold, which all ran about chirping and then huddled under the chicken's wings. The Princess made the same bargain with the wife, but on this night, the Prince asked the page what the murmurings had been during the night, and the page told him the truth; the Prince instructed him to pour out the sleeping draught.
As the wife told him their story, he recognized her and the spell that the Princess had put on him was ended. They left the castle in secret and boarded the griffin, using the nut to allow the griffin to rest during the night. The came home and found their child, grown tall and beautiful, and "they lived thenceforth happily until their death."
Posted by Kristin at 2:28 PM