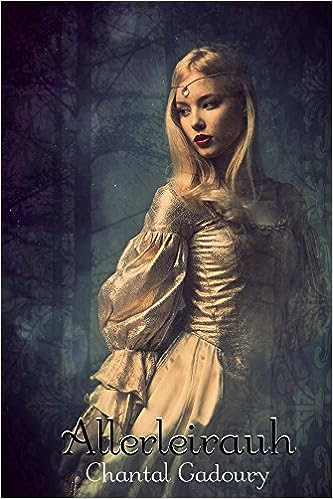 Being a fairy tale blogger has led to some incredible opportunities, and recently one of them has been dialoguing with an author who has recently released a novel version of Allerleirauh (also known as Donkeyskin/Thousandfurs/All-Kinds-of-Fur), Chantal Gadoury. The book is available in Kindle version and paperback (and is currently free if you have Kindle Unlimited!). It's a refreshingly different (and gutsy!) fairy tale to turn into novel form. Given the dark material of incest and rape, it's for a more mature reader.

Tales of Faerie: What drew you to the story of Allerleirauh?

Chantal Gadoury: Well, it really started when I was little. My Dad had bought me a VHS with a bunch of cartoons on it, and one at the end was called “The Coat of Many Colours.” It was a fairy tale that stuck with me - probably more because of the magical and beautiful gowns the Princess wore. I loved the tale, how she had this very complex relationship with the Prince; a secret identity and then who she really was. As I got older, and found the real version of the story . . I think I always just kept it on the back burner for a future project. Something that I would try to tackle someday.

TOF: What was your research process like?
CG:My research for this novel wasn’t too hard. I watched the cartoon a few times. Tried to find the German live action version of the story - and really watched a few other shows here and there to get the life style - develop the setting and the places I wanted the story to be located at. It was relatively a lot easier than “Seven Seeds of Summer” where-as I did a lot of Greek Myth research, and did a lot of Google-Map searches for locations; buildings - etc.

TOF: I imagine it was hard to write the incest scene. What was that like, as an author?:

CG: It was hard, as you can imagine. It was really hard to do. At first I wasn't even sure if I should or wanted to go forward with it. My fiance, who was reading along with everything as I was writing, and I even had a discussion about writing liberties and "pressing the envelope." I wasn't sure if it would be better to leave it to the reader's imagination, or paint the scene, so that it would be all the more vivid and painful. Rob (my fiance) told me that if I was going to write something like this, "go big or go home."

For me as an author, I tried to be very careful in how much description I used. I didn't want to glorify the situation, but I wanted to show the uncomfortable-ness of Aurelia and what was happening to her. It had to be something that we, as the readers, felt - and would carry through the book until the end. As I look back, I know I listened to one song in particular (and it's really odd that I did - which was a Cover of "Earned It.") but didn't do any research in the matter. I took fear and what I would imagine as a terrifying experience for any person in Aurelia's situation. It was uncomfortable to complete, and I know afterwards, I was really unsure of the scene and if I should keep it in. I know rape/incest scenes can really deter readers from a book - but a huge part of the fairy tale of "Allerleirauh" is a Father who desires his daughter, and actively pursues her as a bride. With marriage, sexual consummation and child-bearing is a big factor in an older Royal marriage. I took a lot of inspiration from King Henry VIII (and 'The Tudors') when it came to the King and the Kingdom of Tranen. If you know your history, you'll see similarities.
I knew when I wrote this novel, I wanted to press the boundaries - I wanted to be awareness to this reality. These things have happened and continue to happen in our present world. It was an uncomfortable necessity.


TOF: What's next for you? Any new projects in the works (especially fairy tale retellings?)

CG: I guess what's next for me is to keep writing. I have an idea of a novel I'd like to write, non-fairy tale related though. It's more of a novel based on some things I've gone through as a young adult - love, loosing love, loosing my Father in a sudden heart attack - trying to fight through depression and finding myself. I'd love to tackle another Fairy Tale though. I just need to find a story that I feel passionate enough about, and a new way of telling the fairy tale - in the way I had with "Allerleirauh."

It's hard to take a fairy tale that everyone knows and loves and live up to the expectations they might already have for it, because they've heard it so many times. You can't write a story about "Cinderella," for example, without her glass slippers. Nor, "Beauty and the Beast" without a rose. It's a little easier to have a story that isn't well known and sort of make it your own. I took the liberties of doing that with "Allerleirauh," and tried to give the Princess more of an equal experience with her Prince, rather than the typical "servant in the palace" scenario.
I want to write a fairy tale, but make it new and original. I've thought about "Snow White and Rose Red," or "The Frog Prince" or "Toads and Diamonds." I'd love to take a dark story and bring an element of light and hope to it, and a twist of a happy ending. I suppose I'd ask, are there any suggestions to Fairy Tales that haven't been used, that one would wish to see?

Thanks, Chantal! It's always fascinating to get an author's perspective. Readers, I'd also love to hear what lesser known fairy tales you'd like to have retold!
Posted by Kristin at 9:03 AM