A little while back I shared some images from the Fashion Institute of Technology's Fairy Tale Fashion exhibit, and the accompanying book the curator put together. I immediately put it on my amazon wishlist, and lo and behold, once again the birthday fairies were very generous! 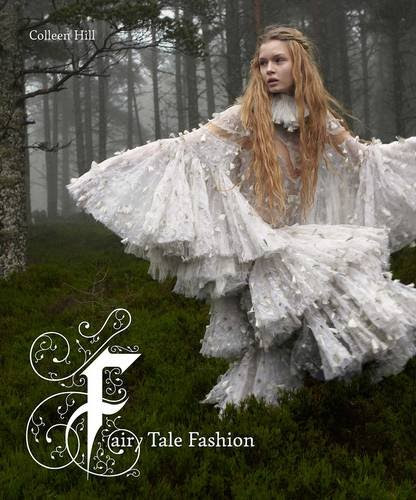 I am absolutely LOVING this book. Of course I also have an interest in fashion/the history of fashion, but even if you don't consider yourself a fan of runway shows and the high fashion world, it's really worth it just to look at the significance of clothing in fairy tales. It's such a significant factor in many tales, and as the author shares, it's really surprising that the connection hasn't been addressed more before. Clothing and attire shows fairy tale characters' identity, status/wealth, transformations, and also provide fairy tale authors with opportunities to satirize the culture around them.

Images (and a review) from here

Most fairy tale books are written by folklorists, so it's nice to read from a different perspective-Colleen Hill comes from the fashion world. Her amount of research for the book is very thorough and impressive, there are maybe a couple things she missed here and there (for example, she says that we have no written description of the Beast's appearance, even though Villeneuve's version, which she references, does describe him), but overall her summaries of the fairy tales and discussion of their main themes are accurate and insightful.

I love all the images (and wish there were more! So many runway looks or historical styles she references but don't make it on the pages!), it's so fascinating to see how fashion ideals can influence the text of the fairy tales (especially Perrault), but also how fairy tales themselves have influenced fashion. For example, Leon Bakst's costumes for the Ballet Russes' Scheheazade ended up being highly influential in the twentieth century:

Also, I'm sure you've all heard someone at some point (or maybe yourself!) lament the phenomenon of people paying for intentionally distressed jeans. This could have connections to Giorgio di Sant'Angelo's 1971 collection, The Summer of Jane and Cinderella. The collection featured frayed and shredded clothes, with natural and simple makeup. Later, deconstructed clothes became a trend, which is still popular today. The next time you hear someone wondering why people want to look sloppy, it's worth considering that Cinderella in rags is an iconic image! Of course, the world of fashion is complex and there are many factors that influence current trends, so Hill isn't suggesting that Cinderella alone started the grunge phase of the 90s, but fairy tales have been influences on major designers for years, and fairy tale illustrators have contributed to our idea of the fairy tale aesthetic, which is often cited as an inspiration behind many modern runway collections. I'll be sharing more insights and images from this book in the weeks to come! I highly recommend it!
Posted by Kristin at 9:05 AM