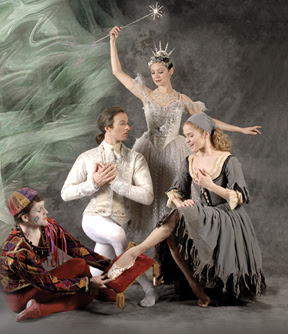 I thought this review in the Chicago Tribune on the Joffrey Ballet doing Sir Frederick Ashton's adaptation of the ballet "Cinderella" was interesting. Ballet and Cinderella fans alike might enjoy reading about the challenges of the dancers playing the stepsister roles, and attempting to make them more than just comic relief.

An excerpt: (emphasis mine)

"Male roles inspired by British pantos, the Stepsisters epitomize the ballet's gentle, hopeful vision. Quarrelsome, jealous, deliciously foolish, they must go beyond comic relief. "At the end of the ballet," says Wheater, "we have to have some feeling for them, empathy for them."
Dancing the bossy older Stepsister for the first time, paired with returning Joffrey member David Gombert as the younger one, Rory Hohenstein says that at first he was intimidated by the part: He'd heard "legendary stories of some of my friends' really funny performances." Plus he knew how important it was to get these character roles, so crucial to the story, right.
However, it's "harder to get your point across when you're covered in ridiculous clothing," he says. Despite being men in dresses, the Stepsisters are coached not to be too over-the-top. That can be "a hard line to walk — literally in heels," Hohenstein says. "You're jumping around in them so much, at the end of the day your feet hurt. But sometimes it's easier in the heels because you naturally walk a different way."
Posted by Kristin at 7:55 AM