This story from India is found in Surlalune's Rapunzel Tales From Around the World Collection, although it reads like an epic mashup of Cinderella, Snow White, and Rapunzel, with some fun twists! 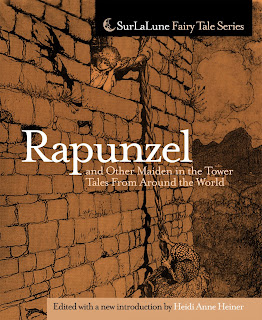 Once there was a Raja with seven daughters,but the youngest, Balna, was more clever than the rest. Their mother had died, so the sisters cooked the dinner.

Every evening, a widow and her daughter would come begging for some of their food. Balna warned her sisters not to help the widow, but her sisters insisted on being generous. Only, when no one was looking, the widow would ruin the meal by putting mud in the bowls.

The Raja noticed the food was ruined, but knew his daughters wouldn't spoil it on purpose, so he hid to watch what happened. When he saw the widow, he called her to him, and she claimed that she had only done it to get an audience with him, and her words pleased him, so he married her. 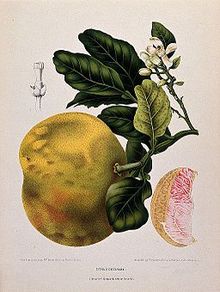 The new Ranee (Queen) hated the Princesses, and wanted to get rid of them. She gave them only a little bread to eat, and none of the nice things they were used to. The sisters used to go to their mother's tomb and weep. As they did that, a pomelo (citrus fruit) tree grew up and gave them food, so they didn't even want any of the bad food their stepmother offered them.

This made her suspicious, so she sent her daughter to see how her stepdaughters could be so healthy, and her daughter discovered the pomelo tree. Balma noticed her, and told her sisters they should send her away, but the sisters saw no harm. So the Ranee's daughter told her about the tree. The Ranee feigned sickness, and told the Raja that only the tree that grew on his wife's grave could cure her, so he had to cut it down.

The sisters wept at this, but by the grave they saw a white cream that hardened into cakes, and they ate this instead. Once again, the Ranee sent her daughter to discover how the seven sisters could be happy and healthy, and despite Balma's warnings, the sisters didn't send her away, and she discovered the truth.

The Ranee pretended to be sick again, and this time demanded that the daughters be killed, because only their blood on her forehead and palms would make her better. But the Raja could not bring himself to kill his daughters, so he brought them out to the jungle and left them there. When they woke up alone, they started crying, but seven Princes found them, who each married a Princess.

They all went to live in the Princes' land, and were very happy. The only one to have a child was Balma, who had a son, and all the royal couples loved the son and raised him together.

They were all happy for a time, but one day, Balma's husband went out hunting, and never came back. Each of the brothers went out looking for him, and also never returned. The Princesses were very grieved.

One night a stranger entered the castle, claiming to be a holy man; he was really an evil sorcerer named Punchkin. He saw Balma and thought her the most beautiful, and offered her to come home with him as his wife. She refused, saying that after raising her son she would go in search of her husband. He was angry at this, and dragged her away, and locked her in a tall tower. 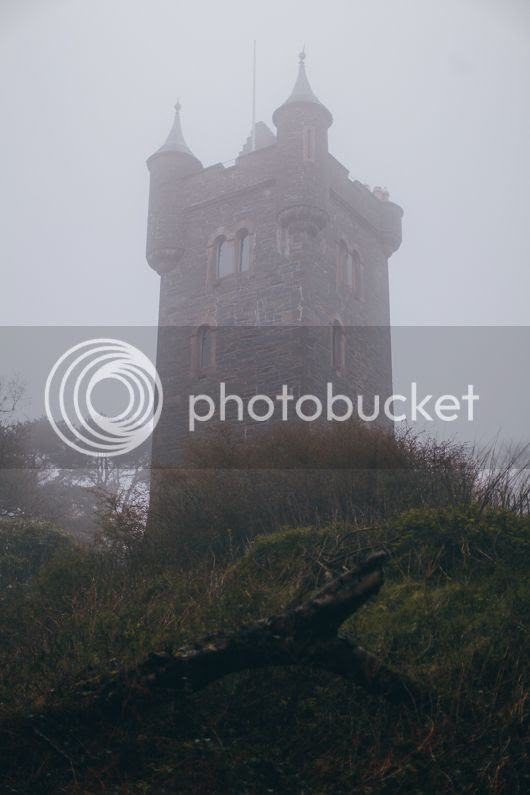 Balma's sisters discovered she was missing, and the committed to raising their nephew. When he turned 14, they told him the truth about his missing parents and uncle, and he was determined to go out and find them. Despite his aunts' protests, he journeyed until he came to a land with a tall tower.

He was befriended by a kind woman who told him that the country belonged to a great enchanter who turned anyone who displeased him into a tree or a stone, and had trapped a Princess in the tower who refused to marry him. The boy realized this must be his family. He disguised himself as the woman's daughter and the sorcerer had him deliver things to his mother in the tower. The son had a ring that had been given to him by his mother at birth; when he showed this to her, she realized who he was.

Balna's son told his mother to pretend to have accepted the sorcerer's proposal, but first to demand to know the secret of his power. She did this, and learned that in a far away jungle there was a parrot, and if the parrot died, so would the sorcerer; only, the parrot was guarded by thousands of genii who would kill anyone who approached. 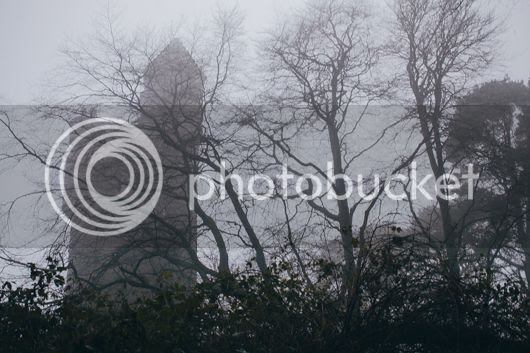 So Balna's son left again, for the remote jungle. On his way, he saw a serpent about to attack an eagle's nest. He slew the serpent, and the eagles were so grateful they were willing to fly him above the genii while they slept and steal the parrot.

Some of my favorite things about this tale:

-Positive sister relationships. Even though Balma is cleverer than her sisters, there is no ill will between them, even after her sisters' foolish choices made a lot of trouble for them! In turn, her sisters weren't jealous or spiteful that Balma was the only one to have a child, but lovingly raised him together in her disappearance.
-Kindness-but not gullibility. At first I was a little bothered that Balma was rewarded for not being willing to share a little food and fire with a widow and her daughter, as if it's clever to never risk anything to give to those who have little. Yet, it's true that there are times to be cautious and not overly nice-we teach children about stranger danger, and people need to be aware of cyber crime scams that prey on people's good intentions to get their money. This is where knowing folklore as a whole can be beneficial-overall, kindness is rewarded, but that doesn't mean every situation is the same! (Plus, we do see Balma's son being kind and going out of his way to save the eaglets, and he is clearly rewarded for that, so even in the same tale we see a balance)
-Balma is saved not by her Prince, but by her son. I don't have anything against lovers rescuing each other, per se, other than the fact that it's become a bit of a cliche in fairy tales. Having the son do the rescuing is a refreshing change, especially since this tale shows:
-A clever and resourceful heroine. True, she is temporarily rendered helpless when trapped in a tower by a sorcerer, but she was the only one to spot the danger from her stepmother and stepsister earlier, and was able to lead the sorcerer into thinking she would marry him, and give up his secret. Again, I love the balance in this tale-I don't like the argument that showing females as victims for part of the story is unfeminist, because there are times where we might all be rendered helpless, and we should never blame the victim. I like tales where the characters work together.

Also, the Tower images in this post (taken by Rebecca Stice, found here) are from Helen's Tower. If anyone is able to vacation in Northern Ireland, you can live out a Rapunzel fantasy by renting this tower out on airbnb!